The social distancing measures have caused more than 1,000 enterprises in Cần Thơ to suspend operations in the last two months.— VNA/ Thanh Liêm

In an online conference between businesses and the government in the southern city, attendees discussed support plans for when social distancing ends, with vaccination and working methods mentioned as priorities.

According to the Việt Nam Textile and Apparel Association, there are seven large factories with from 500 to 2,000 employees each and nearly 40 small production facilities in the city. Cần Thơ is also a destination for training workers for many other provinces in the region.

A representative of the association said: “If there is no good solutions, these workers will be lost and very difficult to find again.”

Nguyễn Thái Hùng, deputy chairman of Việt Nam Textile and Apparel Association in charge of the Mekong Delta region, said garment factories borrowed to buy materials for their orders but could not produce for the last two months during the social distancing period.

The measures were damaging as businesses still have to pay interest, said Hùng, adding: “The three on-site option is only a temporary solution.”

According to a report by the Department of Industry and Trade, the social distancing measures caused more than 1,000 enterprises, or more than 92 per cent of the city’s total, including 155 enterprises in processing and industrial zones, to suspend operations over the last two months.

At the same time, the enterprises operating the “3 on-site” model were facing difficulties because of high costs, while some that did not have facilities to accommodate employees could not reduce the risk of infection. Some of those enterprises used external services for catering, delivery and maintenance.

In terms of agriculture production, Phạm Thái Bình, director of Trung An High Agriculture Joint Stock Company specialising in rice exports, said his company received an order of 150 containers of high-quality fragrant rice from Europe, but his firm could only ship 32 containers, about 20 per cent of the order, during the social distancing period.

Huỳnh Thiên Trang, deputy director of the Việt Nam Chamber of Commerce and Industry’s Cần Thơ Branch (VCCI Cần Thơ) asked to increase the source of vaccines for workers as well as loans for businesses to purchase agricultural products and for an alternative solution to the ‘3 on-site’ option.

Trang said the city needed a roadmap to open up priority groups of industries that both ensure production and safety including the group of manufacturing industries with a large number of workers, those in agriculture, aquaculture and supplying raw materials, those in trade and service industries and transport and delivery.

Trang said industries with a large number of workers that will have their staff vaccinated could go to work with periodic testing.

In the agriculture and aquaculture groups, immediate injection of vaccine should be given to transport workers and stevedores, she added.

In trade and services, the city should reopen traditional markets with 50 per cent of traders vaccinated, while Cần Thơ needed to let restaurants and catering establishments operate take away services, said Trang.

The VCCI Cần Thơ leader said: “These things will immediately provide a daily income for small businesses as well as the number of workers waiting for subsidies, reducing pressure on the city.”

To fulfil the dual goals when resuming operations, Trang said: “It is necessary to implement many solutions in parallel, zoning the different areas to manage the movement of workers.”

Trang said travel regulations should be managed by the business as they could sack any workers which break the rules, which is much better than a fine.

Trang suggested easing social distancing measures in the city by September and reconnect with other parts of the Mekong Delta and HCM City in October so local goods could be sold and exported smoothly.

She said: “If the measures are removed without connecting with other provinces in the region and HCM City, it will not solve the problems of enterprises.”

Agreeing with the VCCI representative, Mr. Nguyễn Văn Hào, chairman of the Cần Thơ Business Association, suggested that the city organise a conference to connect provinces in the Mekong Delta to ease the barriers and better circulate goods.

While Hào asked the city to let enterprises change on-site workers every three weeks, Phạm Duy Tín, head of the Cần Thơ processing zone asked the city to develop and implement the “two on-site” model, in which workers who have had two doses of vaccine could return home after work with travel passes issued and managed by their companies.

Chairman of the city Trần Việt Trường told the conference the city would develop plans and solutions to maintain production, asking businesses to support the city’s measures following Directive 16 as it remains in the very high-risk group.

Trường said the city would try to find vaccine sources to inject workers and let them resume production. He also asked all relevant authorities to complete a plan on restoring production and business by the end of 2021 and support businesses in terms of loans and production plans. — 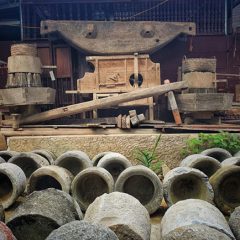