Cruise owners are worried as their cruise ships have been unused for many months because of Covid-19, while they still have to pay hundreds of million of dong in mooring fees. An Son Lam, Director of Indochina Sails JSC, told VietNamNet he will sell his cruise ship at a loss if he can buy a buyer, and he will never enter the cruise business again.

“It costs at least VND200 million a month to anchor a cruise ship. Besides, ship owners also have to pay for the crew. The fee is too high, which is equal to the ships of international stature,” he said. “Meanwhile, there is no client.”

Sai Gon Port authorities decided to share difficulties with ship owners by offering a 50 percent reduction in mooring fees. However, the owners said the fees are still a terrible burden for them.

According to Nguyen Hai Linh, the owner of Elisa ship, Sai Gon Port is imposing fees of seaports on waterway ships. Meanwhile, cruises should be allowed to enjoy the policy for inland wharf, with much lower mooring fees.

In addition to mooring fee, the ships have other kinds of expenses, including bank debts, pay to workers, and ship maintenance fees.

Prior to that, they asked Sai Gon Port to reduce the mooring fee, but the port authorities rejected the proposal. In order to rescue the specific type of tourism, they want the agencies to help slash mooring fees further, and create favorable conditions for them to find places to anchor ships free of charge or with reasonable fees.

“We have proposed creating a ‘soft corridor’ to specify a ‘boundary’ between domestic ships with restaurants and international cruise ships, which will help control people getting on/off the ships and apply suitable fees. However, there has been no reply,” they complained.

“Our ships also have to deal with border guards because domestic and international travelers go through the same gate. This hinders tourism development in the city,” they wrote.

The creation of a ‘soft corridor’ will lessen travelers’ inconveniences when using waterway tourism services at the port.

According to Viet Princess Cruises Corporation’s President Truong Quang Cuong, in the US, Europe, and developed countries, and even in Cambodia and Laos, the best attractions are reserved for cruise terminals. In Vietnam, in Da Nang and My Tho in Tien Giang, cruise ports or tourist piers are all located in the center of the cities, thus making it convenient for domestic and international travelers to have dinner on the river.

As for HCM City, the municipal authorities in 2015 removed cruise ships from Bach Dang Wharf in district 1 to Sai Gon Port in District 4, which has affected the reception of travelers. Meanwhile, inland wharfs for restaurant and passenger cruises are at Mui Den Do (Saigon Peninsula) in district 7, which is 10 kilometers from the city center.

“I don’t know what the future of waterway tourism in HCM City will be like. We understand customers’ demands and such planning is not seen anywhere else,” Cuong said.

“No one is willing to spend one and half hours to move from the center of the city to the wharf just to get into a cruise ship for a 2-hour dinner,” he said.

TienphongNews
Some Vietnamese airlines, travel companies and hotel businesses have proposed the Prime Minister announce the point of time for resuming international tourism in the country right in February. Hanoi – Some Vietnamese airlines, travel
companies and hotel businesses have proposed the Prime Minister announce the point
of time for resuming international tourism in the country right in February.

They said the impressive results in the largest-ever
vaccination campaign have provided a particularly important basis for Vietnam
to accelerate economic recovery and reopen the aviation and tourism sectors to
international friends.

The country has been piloting the hosting of international tourists in seven localities, but this pilot programme has
served only 8,500 visitors over the last two months, they said, pointing to
strict procedures and calling for regulations and policies to be swiftly
aligned to the new context.

The firms cited opinions at the January 24 workshop between
the Minister of Culture, Sports and Tourism and representatives of other
ministries, localities, and businesses as saying that if Vietnam issues the message
of “reopening” at this point of time, it will be a huge opportunity for the
tourism sector to not only revive but also make a breakthrough compared to
regional countries and considerably help smooth investment and trade flows
between Vietnam and other nations.

They proposed
the PM announce the point of time for international tourism resumption in the
country right in February, when all restrictions of movement into or out of Vietnam
are lifted, so as to give a strong boost and help localities as well as
transport, accommodation and travel companies proactively make preparations
though the complete reopening could be no sooner than March 31 or April 30.

TienphongNews
Located in the north central province of Thanh Hoa, Pu Luong is renowned as an ideal destination for trekkers and budget travellers because of its seclusion and fantastic scenery of terraced rice fields and primary forests. Hanoi – Located in the north central province of Thanh Hoa, Pu Luong is renowned as an ideal destination for trekkers and budget travellers because of its seclusion and fantastic scenery of terraced rice fields and primary forests.

It is the best to travel to Pu Luong at the end of May and early June since it is the occasion to start a new rice crop when terraced fields here wear a layer of green, looking all fresh and peaceful.

Mid-summer is also a good time to go to Pu Luong as it is situated in a low land limestone area, with many tropical forests and few inhabitants, making its climate quite pleasant even during hot days.

Visitors can also travel to Pu Luong between September and October when it enters harvest season, with multi-layer terraced fields on the hillsides turning yellowish, making it even more spectacular. During this time, Pu Luong is dubbed as “a paradise amidst the jungle,” attracting a lot of tourists to enjoy the scenery of ripening rice fields.

Residents in the hamlets surrounding Pu Luong, such as Son, Ba and Muoi in Lung Cao commune; Kho Muong in Thanh Son; Don in Thanh Lam; and Hieu in Co Lung, are Thai and Muong ethnic minority people who lead lives steeped in tradition and customs. They remain largely uninfluenced by modern means.

Discovering the local cuisine and culture is a highlight of any trip to Pu Luong. There is nothing more delightful than dishes made from ingredients grown right in the area. Pu Luong is home to an array of vegetables, such as baby pumpkin leaf, green beans and bamboo shoots. For a real Pu Luong lunch or dinner, visitors should try the locally raised pork and grilled mountain snails dipped in fish sauce.

In lunar February, local people flock to the top of Pu Luong to harvest wild bitter-tasting bamboo shoots which are served in various local unique dishes, from simple to difficult. The simplest one, boiled bamboo shoots served with chili fish sauce, is also the most popular dish that locals use as a treat to welcome their guests.

Far different from the hustle and bustle of city life, a day in Pu Luong starts with the sound of singing birds and babbling brooks meandering down through low hills, and the picturesque view of mountains blanketed in a fluffy layer of fog. It truly provides a great getaway for those who want to have some quality time without distractions of modern life.

There are many stilt houses in the villages where visitors can explore daily life of the locals and spend the night. They can also stay in a wide range of hotels and resorts inside Pu Luong Nature Reserve, for example, Puluong Natura Bangalow, Puluong Retreat, Puluong Eco-Garden, and Puluong OhayO, which offer a combination of local architecture and modern elements.

Pu Luong is a nature reserve established in 1999 with its area covering Ba Thuoc and Quan Hoa districts. It is considered a valuable natural reserve for scientific research, socio-economic and ecotourism development./.

TienphongNews
Hanoi’s tourism has seen positive signs after COVID-19 outbreaks have taken its toll on the sector for more than two years, as new products built in the recent past have given a boost to the domestic tourism market since late 2021.

Tourists board a hop-on hop-off that passes by Ho Chi Minh Mausoleum in Hanoi. (Photo: VNA)

Hanoi – Hanoi’s tourism has seen positive signs after COVID-19 outbreaks have taken its toll on the sector for more than two years, as new products built in the recent past have given a boost to the domestic tourism market since late 2021.

Companies have bolstered travel tours during Tet (Lunar New Year), the largest and longest traditional festival of Vietnamese people. They are devising programmes that make tourists be at ease in the new normal, said Director of Hanoitourist Company and President of the Hanoi Travel Association Phung Quang Thang.

In addition to the launch of numerous promotions and discounts, travel agents have taken the initiative in seeking new markets and stood ready to resume outbound tours.

A panoply of tourist destinations in the capital city also work to enhance visitors’ experiences while ensuring safety amid the ongoing pandemic.

Duong Lam ancient village in particular is holding an event to re-enact Tet festival in the past with activities of making chung (square glutinous rice) cake and traditional candies.

With rosy prospects for socio-economic development this year, the municipal Department of Tourism has built a plan for tourism recovery and development for 2022-2023, with a focus on the domestic market. It will pay heed to serving foreign holidaymakers in line with a roadmap to restart international tourism activities.

Hanoi aims to welcome 9-10 million visitors, including 1.2-2 million foreigners in the period, raking in about 27-35 trillion VND.

To realise the targets, tour operators are advised to strengthen linkages to promote unique tourism products of Hanoi, and foster sport and health care tourism, as Vietnam is scheduled to host the 31st Southeast Asian Games (SEA Games 31) later this year. 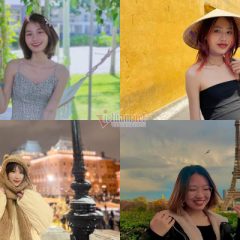