The resolute and uncompromising efforts by the Party and State’s leaders and the no-forbidden zone policy in fighting corruption have created great confidence among people. Inspection and auditing campaigns have discovered violations and proposed to take back VND135.816 trillion and 897 hectares of land for financial treatment; proposed to put administrative sanctions on 1,967 collectives and many individuals; and transferred 98 cases and 121 subjects to investigation agencies.

The figures released at the 17th session of the Steering Committee for Corruption Prevention and Fighting showed the strong determination of the whole system to fight against the dangerous disease – embezzlement.

“Corruption is gradually controlled and tends to be relieved,” said Le Thi Nga, chair of the National Assembly’s Justice Committee, which agreed with the government’s assessment about the embezzlement situation at the latest National Assembly session.

The fight against corruption led by Party General Secretary and President Nguyen Phu Trong has been strongly supported and trusted by the people over the years.

At the 2019 year-end online conference between the Government and leaders of provinces and cities in Hanoi, Trong affirmed that the task of building the Party and the political system, especially prevention and fighting against embezzlement and waste of public resources, has been strengthened.

The fight has been implemented drastically, synchronously, comprehensively, methodically, in depth, without restricted areas, and without exceptions, which has created great commandments.

Many economic and corruption cases, especially big and serious ones, have been discovered, investigated, and prosecuted, and brought to trial which have been applauded by officials, party members and people.

The inspection and examination of Thai Nguyen Steel and Thu Thiem New Urban Area Projects; the decision to put many cases under the control of the Central Steering Committee on Corruption Preventing and Fighting, including Nhat Cuong Company; and the trial of the case, in which MobiFone bought 95 percent of AVG’s shares are the examples.

Fighting against corruption has been identified as an important task throughout many congresses, but the most positive results have been seen recently thanks to the strong determination of the high-ranking leadership.

Corruption threatens the existence of the regime

Corruption became rampant, and in some localities and fields, it became even more serious. Corruption caused very serious consequences, undermining the nature of the Party and the State, corrupting cadres and party members, lending a hand to hostile forces’ sabotage, thus threatening the survival of the regime.

As such, a quarter of a century ago, the Party admitted that embezzlement truly existed, and was not just a ‘risk’.

After the resolution, many more resolutions and documents of senior leaders on this issue were also released. Nearly all of these documents assessed the corruption situation and its serious consequences for the survival of the party and the regime.

Along with the economic development in the transition economy, where public assets are being equitized, or transferred to the private sector, corruption has flourished.

Strictly handling embezzlement cases is a must. But it will be not enough to just focus on ‘fighting’. The people who have power will have opportunities to be corrupt.

The most important measure to prevent embezzlement is ‘controlling power’ by the laws as Trong said, “it is necessary to lock power in the cage of laws and regulations”.

Locking power in the cage of laws and regulations

This was what the Politburo member and permanent member of the Communist Party of Vietnam Central Committee’s Secretariat Tran Quoc Vuong emphasized at the national conference reviewing the results of Party building and organization in 2019, and preparing for the implementation of tasks in 2020.

He said the individuals with unstable political spirit; reduced virtue, capacity and prestige; and signs of decline in political ideology, morality, and lifestyle must not be admitted to the executive committee.

According to Vuong, cadres’ virtue and capability are the decisive factor which determines success and failure.

What happened in the last few years showed that if the heads are enthusiastic and enterprising, with good ideas and strong determination, organizations can develop well. And the situation will be opposite in the organizations with a lack of unity, where the heads are not go-getters, who dare not take action, or just act for themselves.

“It is necessary to pay utmost attention to the personnel,” he said.

Trong also many times emphasized the importance of the personnel work at the 2019 year-end online conference.

He said the whole political system needs to continue to strictly implement Central Resolution No 4 on strengthening the building and reorganization of the Party, and push back the decline in political ideology, morality, lifestyles and the expressions of “self-evolution” and “self-transformation”.

It is also necessary to implement Resolution No 6 on renewing and streamlining the apparatus to make it operate more effectively, renovating the organization and management system, and improving the quality and performance of public non-business units. 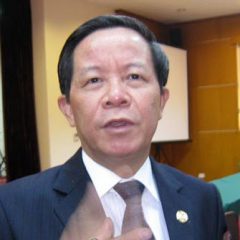