A medical staff prepares to take samples of Covid-19 in central Quang Nam Province on August 11, 2020. Photo by VnExpress/Dac Thanh.

After he tested positive for the novel coronavirus the same day, he has been taken to the National Hospital for Tropical Diseases in Hanoi for treatment.

Vietnam’s Covid-19 tally now stands at 1,305 cases with 1,142 recoveries and 35 deaths. Many of the fatalities were elderly patients with underlying conditions like diabetes and kidney failure. Three people who died after being declared Covid-19 free have not been included in the list of recoveries or deaths.

Of the 125 active cases, 23 have tested negative at least once.

The Covid-19 pandemic has claimed over 1.3 million lives worldwide.

Returnee from Germany infected with Covid-19 Hoàng Lan Hương learns how to knit by her feet. She is paralysed as a consequence of war, but always leads to a meaningful life. — VNA/ Photo Nam Sương

TUYÊN QUANG — Hoàng Lan Hương was born paralysed, has difficulties in speaking and finds it hard to communicate with others.

The only body part she can control is her feet and although she has to use a wheelchair, she hasn’t lost her optimism.

Hương is learning how to write and read, to draw pictures, plant flowers, knit and even use a smartphone by herself.

Trịnh Thị Mùi, Hương’s mother, said she gave birth to her in 1977. She was a cute and healthy baby girl.

However, she didn’t grow up much and was still the size of a three-month-baby when she turned one.

The couple took the baby to the hospital for health a check-up and were informed that the Hương was suffering from exposure to Agent Orange.

Due to her weak health, Hương spent most of her time in her house in Minh Xuân Ward in northern Tuyên Quang Province. She couldn’t speak well, found it hard to communicate and couldn’t move much.

Mùi thought her daughter would live like that for the rest of her life, but Hương had other ideas.

At the age of 10, Hương was able to write on paper by herself.

“We went to the bedroom and saw her write with her feet. There were her names, her age, our names, our ages. They were clear and easy to read,” Mùi said.

Mùi and her husband couldn’t hold back their tears of happiness.

Hoàng Chất Lượng, Hương’s father, said he used to be a soldier and had been exposed to toxic chemicals sprayed by the US during the war.

Hương is paralysed as a consequence of war. Since the day Hương showed her ability to write, Lượng has spent part of his monthly allowance to buy books, newspapers, paper and pens for her to study.

Hương became more self-confident and cheerful and started learning how to knit clothes for her mother and younger brother. She also studied how to embroider.

Her biggest embroidery painting is more than a metre long and features a landscape of mountains. She has also learned how to draw pictures and paints the faces of her parents, children and herself.

Mùi said Hương was sometimes so passionate for the work that her legs cramped up, but she would insist on finishing.

Hương has also learned to socialist. She can use the computer, write emails, surf the web and creates her own channels to guide people on how to knit or embroider.

She posts photos of her products on Facebook and her paintings, woollen hats and flowers made from vegetables and fruits have received a lot of support from internet users.

Hương gives a large number of her products to donate to disadvantaged children in remote areas. On each photo, Hương writes sentences to encourage people and herself to overcome difficulties and lead a meaningful life.

This was a special gift to the children as they were made by a special person who always willed herself to overcome the pain of Agent Orange and have a meaningful life, she said. — 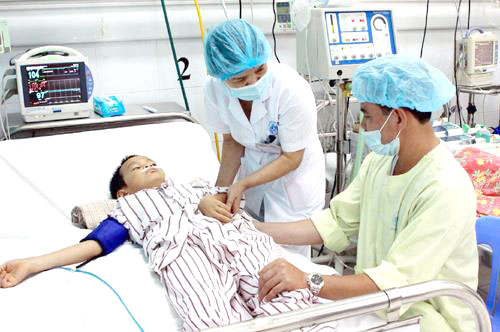 HCM CITY — A 56-year-old patient from Bình Thuận Province was hospitalised recently at the Hospital for Tropical Diseases in HCM City for prolonged fever and diarrhoea.

After examination, Dr Dư Lê Thanh Xuân said the patient had Cushing syndrome, which has symptoms of a fatty hump between the shoulders, a rounded face, and pink or purple stretch marks on the skin.

The patient was treated with broad-spectrum antibiotics, but the situation became worse. Endotracheal intubation and mechanical ventilation then had to be used.

The hospital’s doctors also began using a stronger antibiotic called Carbapenem, but the patient’s blood pressure was unstable and recovery was slow.

The doctors then ordered a blood culture test which checked for bacteria, yeast, and other microorganisms. The results showed the presence of multidrug-resistant Pseudomonas bacteria.

The doctors decided to use a new antibiotic called Ceptaxidime, but the patient had a fever again, a worse blood infection, and kidney failure as well.

Another antibiotic Caspofulgin was used to treat the patient.

“We treated him for 25 days with Caspofulgin instead of seven or 10 days as we do for other patients,” Xuân said.

The patient, who has now been transferred from the ICU to a normal treatment room, is one of many who have been exposed to multidrug-resistant bacteria at the hospital, she said.

Dr Nguyễn Thanh Trường, the deputy head of the hospital, said the hospital’s rate of antimicrobial resistance is 30 per cent to 40 per cent.

The hospital each year has had an average of 150 patients with severe multidrug-resistance. The figure is increasing, Trường said. Since January, 147 out of 1,700 tests have shown patients’ exposure to multidrug-resistant bacteria such as Acinetobacter, Pseudomonas, E.Coli and others, which are resistant to the new-generation antibiotic Carbapenem.

Dr Trần Quyết Tiến, deputy head of Chợ Rẫy Hospital, said that the hospital’s rate of antimicrobial resistance is more than 60 per cent, leading to difficulties in treatment and increased costs as well as influences on patients’ health.

According to the World Health Organization (WHO), antimicrobial resistance is the ability of microorganisms, such as bacteria, viruses, fungi, and parasites, to grow in the presence of a drug that would normally kill them or limit their growth.

Dr Nguyễn Văn Vĩnh Châu, head of the Hospital for Tropical Diseases, said that nearly 88 per cent of Vietnamese buy antibiotics at drugstores without doctors’ prescriptions, a practice that leads to overuse and antimicrobial resistance.

Dr Nguyễn Văn Hảo of the hospital said the environment at hospitals, especially in the Department of Resuscitation – Emergency, is an ideal area to spread drug-resistant bacteria if the control of infections is not carried out strictly.

Dr Ngô Thị Hoa of the Oxford University Clinical Research Unit in HCM City said the use of antibiotics in agriculture has also contributed to an increase in antimicrobial resistance.

Châu said that nearly 10 million people in the world will die from causes related to antimicrobial resistance by 2050, so the proper use of antibiotics should be managed more strictly.

According to the World Health Organisation, Việt Nam is among the countries with a growing threat of antimicrobial resistance. — Harvesting rice in Long An Province. The province aims to increase the cultivation of high-quality rice varieties and the use of technology in 2020-25 to help improve farmers’ incomes. — Photo baolongan.vn

LONG AN — The Cửu Long (Mekong) Delta province of Long An plans to increase its rate of high-quality rice cultivation to 70 -75 per cent during 2021 – 25 from the current 50 per cent, according to its Department of Agriculture and Rural Development.

It aims to produce 2.5 million tonnes of grain annually during the period.

Nguyễn Thanh Truyền, director of the department, said to achieve the targets advocacy of environmental protection and improving the quality of agricultural produce would be undertaken.

The province would speed up construction of irrigation works like water pumping stations, ditches in crop fields and saltwater prevention sluices, research and create suitable sowing schedules, identify rice varieties to be grown in each locality, and organise courses to train farmers in farming techniques, he said.

It will focus on implementing an existing programme to develop high-tech agriculture and increase its high-tech rice farming area from the current 20,000ha to 60,000ha by 2025.

In 2013 the province zoned more than 48,000ha for growing high – quality varieties in 25 communes in the Đồng Tháp Mười (Plain of Reeds) region to serve exports, improve efficiency and enhance farmers’ incomes.

In these areas, farmers have to use advanced techniques like ‘one must and five reductions’ and ‘three reductions and three increases.’

Trần Văn Lắm, who uses advanced techniques to grow rice in Tân Thạnh District’s Bắc Hòa Commune, said he is able to reduce the use of seeds for sowing by 20 – 50 kilogramme per hectare and fertilisers by 20 – 30 per cent compared to traditional methods.

Lê Hoàng Phi in Thạnh Hóa District’s Tân Đông Commune has switched to glutinous rice variety IR 4625 in his 1.5ha field because of its high quality, resistance to diseases and steady demand and price.

He uses technology, organic fertilisers and bio-products to meet market demand and earns VNĐ50 million ($2,160) a year, he said.

Long An is expected to have 498,300ha under rice this year, slightly down from last year, according to the department.

The average rice yield is expected to be 140kg higher than last year at 5.6 tonnes per hectare.