The festival will have a series of activities attracting K-pop young lovers including a K-pop exhibition; photo booths; folk games; Korean traditional hanbok try-on; a flashmob and displays to introduce Korean culture, tourism and cuisine.

“I hope the people who overcame difficulties in the pandemic will have fun at the festival,” said Korean Ambassador Park Noh-wan.

Korean pop performances from twenty Vietnamese individuals and groups will begin at 6.30pm to stir the festival with popular songs of BTS, Blackpink, Seventeen and NCT.

The performers will compete in the qualifying round of the Changwon K-pop World Festival. The contest is the most anticipated contest in the K-pop community of Việt Nam.

Đức Phúc won The Voice of Việt Nam in 2015. Since then he has won listeners over with ballads like Ta Còn Yêu Nhau (We’re Still in Love), Hết Thương Cạn Nhớ (When Love Ends) and Hơn Cả Yêu (More than Love).

These music videos have attracted hundreds of millions of views on YouTube.

K-pop Lovers Festival has been held annually in Việt Nam since 2013. After skipping two-year due to the COVID-19, the festival offers K-pop lovers and tourists in the capital an exciting chance to enjoy different aspects of their favourite genre. —

Enjoying the charm of Hà Nội via night tours

Digitisation helps the museum reach a wider audience, promotes cultural heritage values and increases interaction between the museum and the public. VNA/ Photo

HCM CITY — Most museums in HCM City are in the process of restoring, upgrading and rearranging their display systems after long closures imposed by the COVID-19 pandemic.

The War Remnants Museum in District 3 has been one of the most popular draws in the city for international.

In 2019, the museum welcomed about 3000 people a day, more than 70 per cent of them international tourists. Now, despite the pandemic situation having eased, the number of visitors has dropped to as low as 100 a day.

Nguyễn Trần Tâm Hà, deputy director of the War Remnants Museum, said that to welcome international visitors back, they were focusing on upgrading its thematic galleries.

The museum is also collaborating with the United States on the topic of post-war remedial action that future visitors can learn about.

The Southern Women’s Museum in District 3 has also renovated its infrastructure to create a more modern space. Its exhibition areas are being rearranged with more attractive content and themes.

“In the near future, the museum will coordinate with travel agencies and restaurants to organise culinary events that will allow visitors to enjoy special southern dishes. We also want to open the Áo Dài show every weekend.”

Besides enlarging its physical collection, the HCM City Museum of History is digitising data on existing artefacts and deploying AI and virtual 3D technology for future development.

Visitors to the HCM Museum of History can now read in depth information about any artefact by using touchscreens or scanning a QR code on their mobile phones.

Several performances featuring water puppetry and bội singing have been scheduled for the near future. Further information about these will be posted on the museum’s social media channels such as YouTube and Facebook, Thi said.

Many experts believe that digital transformation is a new step museums should take to become more and more attractive, especially to young people.

Thắm, director of the Southern Women’s Museum, said that digitisation will help visitors interact with artefacts at a deeper level.

Furthermore, when emergencies like pandemics occur, it is essential that museums organise online exhibitions, he said.

Digitisation not only helps the museum reach a wider audience and promote cultural heritage values, it also increases interaction between the museum and the public, he added. —

Artists are in a rush to prepare for a magnificent art show to end the SEA Games 31 at Hà Nội’s Mỹ Đình Indoor Athletics Palace to send a warm farewell to regional friends, according to organisers.

Nguyễn Tuyết Hoa, Marketing Manager of the Việt Nam Opera & Ballet Theatre, said the art show at the closing ceremony on May 23 would be completely different from that in the opening ceremony.

“We will make the closing as a music gala with a long-lasting echo, feelings and inspiration, and send the warm greetings of the hosts Việt Nam to neighbouring friends,” she said. Stage ready for the closing ceremony. Photo Cccourtesy of organisers

The stage will be built with modern equipment such as an led screen and the most up-to-date technology system. The closing ceremony will take place at 8pm for 90 minutes and will be broadcast on VTV channels.

The theme of the show will be “Converge and Shine”.

“During the two-year pandemic, most sport and art activities were stopped,” Hoa said.

“The SEA Games 31 in Việt Nam is a big convergence, where regional athletes flock. They have competed and shined during the past two weeks. The closing ceremony will be the moment to praise and spread their spirit.”

With that theme running through, the art show will open with a dance with traditional conical hats by Dance Group 218, which expresses technology combined with traditional Vietnamese features.

Images of the capital Hà Nội will be represented at the show to say goodbye to athletes: a Thăng Long – Hà Nội holy land with talented people symbolising the strength of the country; a sparkling city with romantic and peaceful moments; beautiful girls wearing áo dài (traditional long dress); and flower sellers in the streets.

“We will review the most moving moments of the sports teams, volunteers and organising members, and the sweat, tears, injuries and smiles of the victories,” Hoa said. Director Hoàng Công Cường in a rehearsal for the show. Photo courtesy of the director

The host flag will be handed over to Cambodian representatives. After that, artists from Cambodia will have a performance of “Cambodia Welcoming and Blessing” to introduce their country, people and culture.

The performance will include the Rose Dance, White Pigeon contemporary dance, and the song “Cambodia Welcoming and Blessing.”

Artist Thanh Hiền, producing manager of the opening and closing ceremony, said Cambodian artists would transmit a message of regional integration, connecting international friends and looking forward to the next SEA Games.

The palace has a stage of 800sq.m and an led screen of 580sq.m. Some 200 tonnes of equipment will be prepared to serve the show.

“The whole team of 400 people will spare no effort to offer a high-quality show with the best sound and light effects,” Cường said.

The event gathers hundreds of handicraft villages, artisans and food suppliers in the city and throughout the country.

The festival introduces the top dishes of the city and some neighbouring localities, typical handicraft villages, which offer tourism services, and demonstrations of traditional handicrafts. The event introduces the best dishes of the capital. — Photo Hoàng Lân

“This festival aims to advertise the images and destinations of Hà Nội’s tourism and introduce local cuisine to both domestic and foreign visitors,” said Nguyễn Thị Mai Anh, deputy director of Hà Nội Investment, Trade and Tourism Centre, at the opening ceremony on Friday night.

The event highlights the importance of cuisine and handicraft villages as tourism products to contribute to the local economy and preserve intangible heritage, she said.

Hà Nội has been considered a hub of delicious dishes, which represent the creativity and talent of local residents.

She said that the city had been voted as a city with alluring cuisine by various international travel magazines.

Hà Nội hosts more than 1,350 handicraft villages, many of which are popular destinations for tourists.

The festival will last until May 23, and is part of a series of activities to advertise the capital as a safe, friendly and attractive destination. — 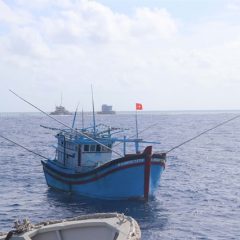 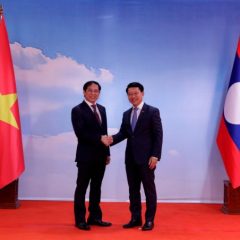