Hanoi has planned to turn Thang Long Imperial Citadel into the most beautiful heritage park, a special destination of the capital city.

Kinh Thien Palace was built in 1428 during King Le Thai To’s reign (1428-1433) and completed in King Le Thanh Tong’s (1460-1497). It was the most important palace where the court held the most solemn rituals, welcomed foreign emissaries, and discussed affairs of state.

Kinh Thien Palace was built in 1428 during King Le Thai To’s reign (1428-1433) and completed in King Le Thanh Tong’s (1460-1497). It was the most important palace where the court held the most solemn rituals, welcomed foreign emissaries, and discussed affairs of state.

The palace was destroyed in 1886, only the foundation and the staircase remain today as the most important heritages in the Thang Long Imperial Citadel. The pair of stone dragons railing the staircase was a masterpiece of art, representing the typical sculpture under the Le Dynasty.

Located in the south of the palace, the staircase was built with large slates with ten steps. There are four stone dragons divided the steps into three alleys, forming the Royal staircase that the King walked in the middle. The steps were 13.7 meters long, 4.45 meters wide and 2.1 meter high with the two stone dragons carved in 1467 which were still relatively intact.

The stone dragons and decorative patterns on the staircase are unique, which are not found in other relics in the same category of the same period. Dragons have their head held high and their body curved into many arcs. On their back, there is a long winding fin looking like fire flames.

There is also stone relief of clouds that turn into a dragon in this staircase, a popular decorative pattern of the Le Dynasty, especially on stone steles and pottery products.

Besides, the image of the lotus also prolific here, showing the influence of Buddhism.

However, different from the simple lotus in the sculpture of the previous dynasties, this one is carved in a more complicated and sophisticated way in combination with the image of peony.

Furthermore, lotus leaves are also carved with more detail. With an area of 4.6 squared meters, it is regarded as one of the country’s largest and most beautiful stone sculptures with ancient decorating patterns.

In the north of Kinh Thien Palace, there was another staircase of seven steps, smaller than the main one in the south. The two rails of the staircase are in the forms of dragons carved under the Le Trung Hung Dynasty’s time of the 17th-18th century. The dragons were 3.4 meters long with seven curves. The two sides of the handrails were also decorated with lotus, waves, fire, and clouds.

The foundation and staircase are meager relics of palace architecture under the Le Dynasty that remain to this day, partly reflecting the grand scale of Kinh Thien Palace in the past.

Nowadays, space has become a “double” relic for the two eras. Kinh Thien Palace of Thang Long ancient imperial citadel and the Headquarter of General Commander of the Vietnam People’s Army, an important relic of modern Vietnamese history. It is also where cultural events take place regularly such as exhibitions and art shows that attract a large number of visitors.

Since November 2004, when it was officially opened to visitors, the palace has become one of the most interesting places in the city.

The main staircase of Kinh Thien Palace was recognized as a National Treasure from December 2020.

Recently, Hanoi has planned to turn Thang Long Imperial Citadel into the most beautiful heritage park, a special destination of the capital city and the restoration of Kinh Thien Palace will be a major task in the coming time.

Many tourist sites in HCM City suspended due to Covid-19 At a meeting with Vietnamese Consul General Pham Binh Dam in Hong Kong on Wednesday, Jason Wong, chairman of the Hong Kong Travel Industry Council, said the resort island of Phu Quoc in the southern province of Kien Giang is an ideal place to deploy the travel bubble if the two sides reach an agreement on isolation exemption and specific implementation mechanisms.

With no end in sight to the pandemic, border closures are causing businesses and economies to collapse while failing to keep countries absolutely safe, Dam said as quoted by World&Vietnam Report news site.

“Therefore, border reopening would be necessary but should be piloted on a small scale before being expanded.”

Dam said the Consulate General of Vietnam in Hong Kong would closely coordinate with the council and relevant agencies of both sides to speed up the travel bubble pilot.

Wong said Vietnam is an increasingly attractive destination for people in Hong Kong. The council will work with the Vietnamese side to promote the tourism markets of both sides in the near future.

Some of Vietnam’s major tourism markets with high Covid-19 vaccine coverage that could be considered for international reopening include mainland China, South Korea, Japan, Taiwan, the U.S., Germany, Russia, the U.K. and France.

Vietnam closed its borders and canceled all international flights in March last year, and allows in only certain categories of visitors with Covid-19 quarantine requirements.

We also know that meat contains a number of important nutrients that are needed by our bodies for carrying out vital metabolic functions and provide us with energy and keep us healthy. Therefore, meat is one of the most popular food in our diets.

Meat has various kinds and for “thit kho” (simmered meat) we also have a wide range of choices like pork, beef, chicken, duck. We can make a numerously delicious dishes from them, such as “thit kho tau” (meat simmered in a clay pot), “thit kho dua” (meat simmered with coconuts), “thit bo kho hat dua” (beef stewed with seeds of water-melon), “gio heo kho dua” (pork-pie braised with coconuts) or “ga kho chao”. Although there are a large number of dishes related to “thit kho”, the methods of cooking are similar. To be specified, the process of making “thit kho tau” will be introduced on the following.

First of all, we need to prepare ingredients: sugar, pepper, red chilli, a coconut, salt, garlic, onion, “keo dang” and lean pork. Pork is washed carefully and then cut into small square pieces, marinated with pepper, sugar and salt for two hours. While we boil a pot filled with coconut juice. After that, we put pork into boiled coconut juice, maintain low level of fire and ensure the level of coconut juice, if it dries, we pour a little water into the pot. When the meat change colour, we add “keo dang” to the pot. And we simmer the pot until sauce is thick and coats meat.

“Thit kho tau” is really gorgeous and can be served with various kinds of food but especially suitable for using with steamed rice.

In general, making “kho” dish is not difficult but requires our patience. Because no oil needs to be added with this cooking technique, food cooked in this method may be lower in fat compared with food prepared by other methods such as sautéing or frying. And unlike boiling, nutrients are not leached out into the water. The food is not only delicious but also good for our health.

TienphongNews
Travellers are set to have an opportunity to experience Vietnam’s beauty on trains with steam locomotives. A steam locomotive after being restored. (Photo: danangfantasticity.com):

Hanoi – Travellers are set to have an opportunity to experience Vietnam’s beauty on trains with steam locomotives.

The Ministry of Transport has approved in principle a project on the renovation and building of such tourist trains on the Hue-Da Nang route, a section of Hanoi- Ho Chi Minh railway route.  The Vietnam Railways Corporations (VNR) will collaborate with the Dong Duong Rail Tourist Service Co.Ltd in carrying out the project.

The Ministry of Transport asked the VNR to collaborate with the Indochina Rail Tourist Service Company Limited to allocate funds to invest in the items of the project, ensuring compliance with current standards and technical regulations.

In addition, the VNR should develop a train schedule to ensure the safety for the transportation of passengers and goods.

Units must pay a fee for using railway infrastructure from the project’s revenue as required. The interior of the steam locomotive. (Photo: danangfantasticity)


To effectively exploit the steam locomotive, transportation experts said it is necessary to build auxiliary works such as coal and water supply systems and they must be licensed by the competent authority.

A steam locomotive is a rail vehicle that provides the force to move itself and other vehicles utilising the expansion of steam. It is fuelled by burning combustible material  – usually coal and oil – to heat water in the locomotive’s boiler to the point when it becomes gaseous and its volume increases 1700 times. Functionally, it is a steam engine on wheels. Fuel and water supplies are usually carried with the locomotive, either on the locomotive itself or in a tender coupled to it.

This type of locomotive was widely used in the world from the 19th century to the middle of the 20th century. 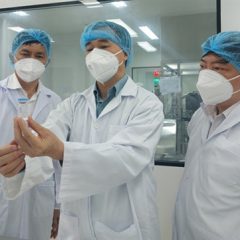