HÀ NỘI — Today marks the one-year anniversary of the first COVID-19 case in Việt Nam. On January 23, 2020, a man visiting from China tested positive for coronavirus. Since then all our lives have been turned upside down as the pandemic spread to all corners of the globe. But despite global upheaval, Việt Nam has been praised for the way it has handled this deadly plague.

As of January 22, the country has seen a total of 1,548 cases with just 35 proving fatal, while 1,411 have recovered. The country has undergone 52 days without a case of COVID-19 community transmission.

Viet Nam News takes a look back at the key events of the past 12 months since that very first case was recorded, and the tremendous efforts made by the authorities, medical staff and security forces, as well as the entire nation, to contain COVID-19.

January 23, 2020: The first case of COVID-19 is reported after a 66-year-old Chinese man came from Wuhan to Viet Nam to visit his son. He and his son were then treated at Chợ Rẫy Hospital, HCM City.

February 13, 2020: Sơn Lôi Commune, Bình Xuyên District in Vĩnh Phúc Province is locked down after six cases were discovered there. 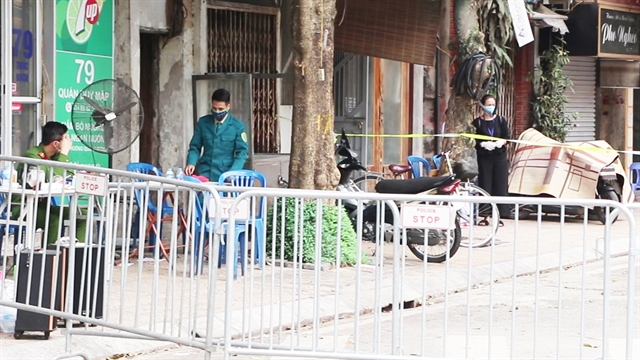 March 6, 2020: Patient 17 tests positive for coronavirus after coming back from Europe, marking a second wave of COVID-19 cases.

March 25, 2020: Việt Nam suspends all international flights to contain the spread of COVID-19. April 23, 2020: The social distancing order is lifted in most areas of the country except for some high-risk zones. British pilot Stephen Cameron recovers after being in a coma. — Photo courtesy of Chợ Rẫy Hospital A nurse holds the infant born to a mother with COVID-19. — Photo courtesy of National Hospital for Tropical Diseases

December 10, 2020: Call for registration for human trials of a COVID-19 vaccine.

December 17, 2020: First dose of the vaccine is administered.

January 2, 2021: New highly more transmissible variant of coronavirus first reported in HCM City after a woman is repatriated from the UK. The lockdown in Chí Linh City of the northern province of Hải Dương was lifted at midnight on March 3 as the locality successfully controlled the COVID-19 outbreaks. — VNA/ Photo Mạnh Minh

HẢI DƯƠNG — From midnight on March 3, the coronavirus lockdowns in Chí Linh City and Cẩm Giàng District in the northern province of Hải Dương were lifted and province-wide social distancing ended after 15 days.

On January 27, the first community COVID-19 case in Hải Dương Province’s Chí Linh City was detected – Patient 1,552 – a worker in close contact with a woman who tested positive for SARS-CoV-2 after arriving in Japan.

According to the National Steering Committee for COVID-19 Prevention and Control, Chí Linh City was the largest outbreak in the country since the pandemic began early last year with 383 confirmed cases out of 684 cases reported in Hải Dương Province.

The outbreak started at a company with more than 2,300 workers and then spread to the community, which caused difficulties in controlling the infections.

As the outbreak was gradually controlled, Hải Dương Province authorities decided to end the lockdowns and province-wide social distancing, entering a “new normal” phase with twin tasks of drastically fighting the coronavirus and taking action for socio-economic development.

At the moments when lockdown barriers were removed at Sao Đỏ Square in Chí Linh City, local officials, people working on the frontlines and residents expressed excitement and happiness.

“As the city is no longer under lockdown, we are very happy because it proved that we beat COVID-19,” he said, adding that work and production could resume.

Doctor Nguyễn Thị Hằng from Chí Linh City Healthcare Centre’s Diseases Control Department said that like many people, she felt the lockdown-lifting moment was like New Year’s Eve when people usually think of a better beginning.

“For over 20 years working in the healthcare sector, the past month is the first time I worked under such high pressure. We usually skipped meals or ate during short breaks as many COVID-19 cases and their close contacts were reported,” Hằng said.

She added that her workload gradually fell over the last ten days.

Nguyễn Thành Nam, a resident in Chí Linh, said that after the lockdown, residents would still strictly follow preventive measures, avoid crowds and would try their best to contribute to the city and the whole province’s development.

Nam said that amid the pandemic, he understood and appreciated more about the care and support among people in Chí Linh, as well as of people across the country to those under lockdown.

Besides lifting the lockdown in Chí Linh City and Cẩm Giàng District and the end of province-wide social distancing, the Hải Dương Province People’s Committee on Tuesday decided to divide the localities in the province into two groups under different restrictions depending on the COVID-19 risks.

The remaining eight localities in the province will follow the less restrictive Government’s Directive 19 on social distancing norms.

Social distancing measures should be implemented flexibly, for example, trade and production activities would be allowed if they could ensure the ability to trace new cases and conduct tests if needed, Phu said.

“It is necessary for Hải Dương Province to detect a possible risk of an outbreak in a certain area. The risk can be defined thanks to massive testing for areas with reported cases of fever or cough,” Phu said, adding that community-based COVID-19 prevention teams could help collect information.

Then, authorities need to assess the connection between the other areas and the areas where outbreaks happened.

Each locality in the province should also review their preventive measures and strictly follow the Health Ministry’s ‘5K’ message as the pandemic was still developing worldwide. Provinces with industrial zones like Hải Dương were always more vulnerable to disease risks. — HÀ NỘI — The Ministry of Transport permitted Vân Đồn International Airport in the northern province of Quảng Ninh to reopen from 6:01am on Wednesday with the COVID-19 pandemic put under control in the province and the airport deemed safe to transport passengers.

The airport was temporarily closed from January 29 after a COVID-19 outbreak involving several of the airport’s security staff was detected.

The national flag carrier Vietnam Airlines announced earlier it will resume flights between HCM City and Quảng Ninh on Wednesday, becoming the first to restart flights to Vân Đồn airport since the cluster broke out.

From March 3 to 17, there will be one weekly flight between the two destinations on Wednesdays. Flight numbers will be increased to three a week, on Wednesdays, Fridays, and Sundays, from March 18 until the end of the year.

Passengers on the first three flights after resumption will enjoy a discounted fair of VNĐ507,000, including taxes and fees, per journey. —

HCMC – The People’s Court of the southern province of Tay Ninh on March 2 handed down the death penalty to Ekwegbalu James Nzube, a 45-year-old Nigerian man, for transporting nearly 4kg of drugs from Cambodia to Vietnam.

Before the arrest, Nzube stayed at Hoa Hong Hotel on To Ky Street, Trung My Tay Ward, District 12, HCMC.

According to the indictment, Nzube was caught illegally entering Vietnam from Cambodia by border guards at border marker No. 170/3 in Loi Thuan Commune, Ben Cau District, at around 8 p.m. on July 30, 2020.

The border guards found four packages containing nearly 4kg of drugs in his luggage, which were later identified as Methamphetamine.

Nzube said he met another Nigerian man named Johe in Guangzhou, China, in 2014, who hired him to transport the drugs from Cambodia to Vietnam.

Nzube arrived at the Tan Son Nhat International Airport on March 13, 2020. He received a phone call from Johe on July 23 and agreed to transport the drugs from Cambodia to Vietnam for US$2,000.

Four days later, he took a taxi from HCMC to the Moc Bai International Border Gate in Tay Ninh Province and walked to Cambodia.

On July 29, he received four packages of drugs and US$1,100 from an unidentified man and was arrested while returning to Vietnam on July 30.