HÀ NỘI — The market continued to rise on Thursday, boosted by gains in material stocks and interest from foreign investors as they net bought more than VNĐ1 trillion on two main exchanges.

The VN-Index on the Hồ Chí Minh Stock Exchange (HoSE) settled higher yesterday, up 10.81 points, or 0.81 per cent, to 1,345.55 points. The index struggled in the morning trade as strong selling pressure caused the index to fall in the early session, but surging demand helped halt losses and push the index to recover.

The market breadth was positive with 262 stocks increasing, while 116 fell. However, the liquidity was lower than the previous session as 635.5 million shares were traded on the southern market, worth over VNĐ19.32 trillion (US$840.5 million).

The gain was mainly driven by large-cap stocks in material, real estate and banking sectors.

The 30 biggest stocks tracker VN30-Index posted a rise of 0.97 per cent to close yesterday at 1,486.46 points. Twenty of 30 biggest stocks in the VN30 basket climbed while eight stocks fell and two ended flat.

Hoà Phát Group (HPG) and Việt Nam Rubber Group JSC (GVR) were the two biggest influencers on the market’s trend yesterday, with gains of 2.74 per cent and 4.19 per cent, respectively.

Meanwhile, foreign investors were net buyers on both exchanges with a total value of over VNĐ1.14 trillion. Of which, they net bought a value of VNĐ1.1 trillion on HoSE and a value of VNĐ19.32 billion on HNX.

In its recent report, VNDirect Securities Corporation was more cautious on the complexity of the COVID-19 outbreak and said that the prevention measures might make it difficult to build another rally in the short-term.

“The VN-Index had plunged 13.7 per cent from the peak due to concerns about negative impacts on the macro-economy and business activities,” the securities firm said.

“The average liquidity in July also decreased by 12.8 per cent compared to the previous month.” 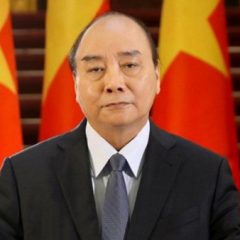