Over 500 reporters and technicians from more than 200 media outlets, including 191 domestic and 26 foreign ones, will cover the 13th National Party Congress at the scene, according to organizers.

The event’s press centre was launched the on January 22 by the Party Central Committee’s Commission for Information and Education.

Le Manh Hung, deputy head of the commission and director of the press centre, said the centre offers the best conditions possible for the media coverage of the event.

It arranges venues and provides technical assistance for participating press agencies, including key agencies such as Vietnam Television, Radio the Voice of Vietnam, the Vietnam News Agency, the Nhan dan (People) Newspaper, and the Communist Party of Vietnam Online Newspaper.

Meanwhile, the standing board of the centre together with a health sub-committee serving the congress have conducted COVID-19 tests for Vietnamese and foreign reporters and technicians, as well as staff serving the congress. Regulations on interviews of delegates and news coverage have already been issued.

A drill to transport AstraZeneca Covid-19 vaccines took place Friday night in HCMC prior to large-scale administration starting next Monday.

A national database on population, which was launched on February 25, is a breakthrough in population management work in the country.

One of six core national databases

Prime Minister Nguyen Xuan Phuc signed Decision No 896/QD-TTg in June 2013 approving a scheme on simplifying administrative procedures, citizenship papers, and databases related to population management during 2013-2020, which set out the two key tasks of building a national database on population and a system for citizen ID production, issuance, and management.

Analysts said the database is “a valuable national resource” and one of six core national databases playing an important role in the process of building e-government towards a digital government, a digital economy, and a digital society in Vietnam.

Regarding the system for citizen ID production, issuance, and management, relevant agencies have so far completed research and production of new ID cards embedded with chips and QR codes. Fifty million such cards are expected to be issued before July 1.

According to Major General To Van Hue, Director of the Police Department for Administrative Management of Social Order at the Ministry of Public Security, the national database on population serves as a foundation for modernising State administrative management and contributes to developing e-government. This is an important breakthrough in population management in the country, helping simplify administrative procedures, reduce citizenship papers, cut cost and time for citizens, and improve the quality of administrative services.

Hue stressed that the national population database will collect and update information related to the population, thus improving the efficiency of population management and assisting with citizen verification, contributing to ensuring security and order and effectively fighting crime. The six new cases in Hải Dương Province have all been quarantined. 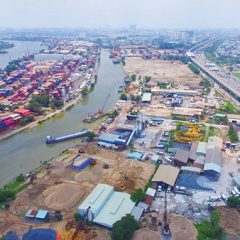