HCM CITY — Professional and amateur photographers across Việt Nam are encouraged to compete in a photo contest highlighting the beauty of Vietnamese Hoàng Sa and Trường Sa islands.

According to the organisers, photos should feature the daily activities of people and soldiers in the Hoàng Sa and Trường Sa archipelagos and the DK platforms who are protecting the country’s sovereignty in the sea and islands.

The photos should also reflect the people’s love and gratitude for soldiers and people in the archipelagos and platforms.

Each contestant can submit up to two collections or 10 single photos in colour or black-and-while at hoangsatruongsanhagian.com by August 15.

Entries must be sent in a digital file in JPG format, with a maximum file size of 3 Megabytes and a resolution of 300dpi.

Contestants will be judged by Vietnamese photographers such as Nguyễn Hồng Nga, vice chairwoman of the city Photography Association, Nguyễn Thanh Tâm and Nguyễn Á.

The organisers will present a total of one first prize, two second prizes, three third prizes and five consolation prizes.

The winners will be announced on August 20.

The organisers will also select the 50 best photos for an exhibition at the Youth Cultural House in District 1 on August 25.

The Vừ A Dính Scholarship Fund and the “For Hoàng Sa – Trường Sa” Club also launched a writing contest on the potential and beauty of the sea and islands, the sacrifice of soldiers in protecting the country, and daily activities of fishermen.

Contestants can send their entries, short stories and poems, to the organisers via email [email protected] by August 15. — VNS Artist Roberto Arcuate collects waste such as plastic pipes and gives them a new life in the form of porcelain sculptures. VNS Photo Minh Thu.

Mexican contemporary artist Roberto Arcaute has chosen Việt Nam as the final destination in his journey to finish his latest installation project.

The project, named Union: Narrations of a Civilisation, aims to convey a message about the environment. Its idea is to take and copy everyday waste objects and reproduce them in porcelain sculptures with all their labelling information in blue.

In the later phase of the project, he intends to select some of the finished objects to create a form of conglomerate type mass with the help of clay, cement and oven heat.

He said: “The word UNION in this project refers to something obtained by conglomeration (gathering, piling up, and joining fragments). The project proposes to show how a narrative of a consumer society is constructed and how its waste can be reincorporated into our civilisation from reproductions of itself.”

The 46-year-old artist has pursued Union: Narrations of a Civilisation for five years under the sponsorship of the Mexican government. He conducted parts of his project in Mexico, the US, China and several others before coming to Việt Nam. 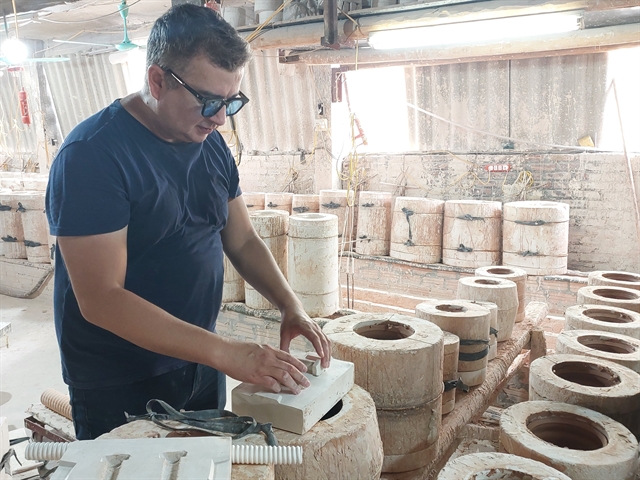 He first came to the country eight years ago as a tourist and had the opportunity to have first-hand experience of local culture. He was particularly impressed with Vietnamese handmade pottery due to its sophistication and uniqueness and decided to finalise his installation project in Bát Tràng Ceramic Village on his second visit.

He added: “Việt Nam has a culture similar to other countries in the region but also has its own identity and pottery is an example. The clay in Bát Tràng Village is different from the places I’ve been to. In addition, a most striking feature in each product is the craftsmanship.

“I have travelled to Jingdezhen Town, the ceramic capital of China. But I was still impressed on how meticulous it takes for each Bát Tràng artisan to create the best version of their works. They don’t focus on mass production.

“It has been a great adventure to have this visual experience. I think Bát Tràng is becoming famous in the world and soon we will hear much more about this wonderful area of Việt Nam.”

It took him a while to find the appropriate pottery workshop and kiln. Eventually he found one that could provide him with English-speaking assistants and a space to work without affecting its daily production.

It didn’t take him long to get accustomed to his new life and discover more exciting aspects from the simple things of city life.

Every day, the Mexican artist drives his motorbike from his apartment in the centre of Hà Nội to Bát Tràng Province, about 10km away. Possessing an international driver’s license, driving a motorbike has caused him no difficulties, unlike many other foreigners who might feel afraid of heavy traffic in the capital city.

“I leave home early in the morning and return at sunset,” he said. “Along the way, I always hear very special sounds. People say it’s the sound of summer cicadas. It was the first time in my life that I heard such sounds.

“Another interesting thing is that Hà Nội has a lot of rivers and lakes and it rains frequently this season. I find the climate here wonderful. My hometown is in Monterrey, a dry area with many deserts, hills and having no natural water source, so when I saw Hà Nội with many rivers and lakes, I was extremely excited. Whenever crossing the Red River, I often try to slow down to enjoy the view.

“The most important wealth is the kindness of every person and also the spirit of work that could be seen everyday. Without a doubt, that makes Việt Nam different from other countries.” He is particularly impressed with the kindness of local people. VNS Photo Minh Thu.

Arcaute has also been collaborating with the Mexican Embassy in Việt Nam to conduct a series of art activities, like a conference at the Việt Nam University of Fine Arts.

“I feel very lucky because it is not easy to win such art support in my country,” he said.

Arcaute plans to have Union: Narrations of a Civilisation exhibited in both Mexico and Việt Nam next year, and at the same time, publish a book describing the entire project in four languages: Spanish, English, Chinese and Vietnamese.

The Mexican artist also revealed that he would like to travel to HCM City, Đà Nẵng and several other destinations during his next visit to explore the native culture, which might inspire him with his future works. VNS HÀ NỘI — World Cup champion coach Diego Raul Giustozzi will take charge of the Việt Nam national futsal team and is expected to lift the team up at the coming AFC Futsal Asian Cup 2022 in Kuwait.

Việt Nam’s first time competing in the World Cup was in 2016 in Colombia where they finished in the quarter-finals.

At the same tournament Giustozzi, 44, guided Argentina to the top podium for the first time, beating Russia 5-4 in the final.

Earlier, the former Argentinian national player competed in Spain for many years before moving to be a coach in 2013.

He also led Argentina to take a silver at the South American Games in 2014 and the third Continental Cup in same year.

The Argentine manager whose contract’s details are not revealed, on August 1 called up 23 players for the first training camp in HCM City.

Young faces such as Nguyễn Văn Hiếu and Châu Đoàn Phát and fixo Nhan Gia Hưng are also called up this time.

After five weeks of training, they will leave for Thailand for an invitational tournament on September 8-19 where they will play Iran, Morocco, Finland, Angola and the hosts.

They will compete in the Kuwait competition from September 25-October 20.

Việt Nam are in the same group as South Korea, Saudi Arabia and defending champions Japan.

Giustozzi is expected to help Việt Nam gain a good result and qualify for the Futsal World Cup 2024. VNS Vietnamese players celebrate their goal against Singapore in the AFF U16 Youth Championship on July 31 in Jorjakarta, Indonesia. Photo of VFF

HÀ NỘI — Việt Nam beat Singapore 5-1 in their opening match of the AFF U16 Youth Championship on July 31 in Jakarta, Indonesia.

It took the young Golden Star warriors eight minutes to open the score when Nguyễn Hữu Trọng received a ball from a poor clearance in the box and fired home.

The goal upped the Vietnamese confidence and they quickly applied their attacking style.

Two more goals came, in the 23rd minute through Phan Thanh Đức Thiện who made a well-worked finish, and when Nguyễn Xuân Toàn unleashed a floater to the far post in the third additional minute of the first half.

Earlier, Muhammad Rasul Ramli narrowed the score for Singapore in the 45th minute with a well-taken freekick.

Ten minutes after the break, substitute Huỳnh Văn Danh gave Việt Nam another goal when he headed home from a corner with his first touch of the game.

Việt Nam had to play with 10 men from the 86th minute when Trọng took a second yellow card.

However, this did not prevent Việt Nam from scoring.

They tore Singapore keeper Kaiden Ng’s net in additional time with a strike by forward Hoàng Công Hậu who weaved past three defenders before slamming home.

In the meantime at the Maguwoharjo Sleman Stadium, hosts Indonesia won 2-0 against the Philippines in Group A.

“We created a lot of chances but we just could not add to the score. But it has to be pointed out that the Philippines are not a bad side. They certainly gave us some tough moments,” said Indonesia head coach Bima Sakti.

Meanwhile coach Christopher Pedimonte of the Philippines said his plan was to match Indonesia in the first half but the players made an early mistake. He thought the loss was not so bad as they manage to limit the score at 2-0.

Next round, Việt Nam will play the Philippines on August 3 while Indonesia will face Singapore.

In today’s action in Group B, Timor Leste will meet Laos while Thailand will entertain Brunei. VNS