A welcome programme is held by the Quảng Ninh tourism authority to greet a group of 650 tourists from Malaysia. Photo quangninh.gov.vn

HẠ LONG CITY — Large foreign tourist groups to Quảng Ninh Province in recent days are good signs for a boom of world tourism development in this northern coastal province after a two-year hiatus caused by the COVID-19 pandemic.

A delegation of 650 travellers from Sarawak State, Malaysia arrived in Quảng Ninh this week to have a four-day stay, marking the largest foreign group to visit the locality.

This is one of the encouraging results from the provincial authorities’ efforts to promote itself in the international tourism market, especially after the 17th East Asia Inter-Regional Tourism Forum (EATOF) successfully held in October in the province’s Hạ Long City, according to Quảng Ninh Portal (QNP).

Sarawak State is one of the 17 EATOF members. The Malaysian visitors arrived in Quảng Ninh on Tuesday, planned to stay at four- and five-star hotels and experience various tourist services in the province.

During their four-day stay in the country, the tourists had a two-day tour to Hạ Long Bay, the UNESCO-recognised world heritage site, explored traditional cuisine and experienced tourist activities.

Although it is a relatively new tourism market for foreign visitors from Malaysia, Quảng Ninh has impressed them with its safety, good pandemic control, impressive natural landscape, friendly people, and good quality services.

The safety factor is one of the major competitive advantages of Quang Ninh tourism in the international market, according the QNP.

At a bilateral meeting between Quảng Ninh and Sarawak State within the framework of the last EATOF, leaders of the two localities pledged to enhance cultural exchange activities, boost linkages between their heritage sites, promote building tours to destinations and strengthen exploitation of the two-way tourist markets.

In the coming time, Quảng Ninh expects to welcome more than 1,000 visitors from Malaysia, said a report on the website of the provincial tourism authority, dulich.quangninh.gov.vn.

Yap Oi Leng, director of Malaysia’s Energy Travel agency, said to vov.vn that the company chose Quảng Ninh for the tour because the locality boasts many beautiful and renowned sightseeing spots with modern infrastructure.

The most popular time looks set to be in January next year when around 1,000 foreign visitors on five charter flights are due to arrive in Việt Nam, with Quảng Ninh selected as one of their destinations.

Phạm Ngọc Thủy, Director of the provincial Department of Tourism, said to vov.vn that the province will have many opportunities when the international tourism market opens wider next year.

“We’re planning to work with Siem Reap Province, Cambodia, Luang Prabang Province in Laos, and Japan this December. The Cambodian market is a good place to connect with international visitors in Southeast Asia, so we will work with them as soon as possible and generate momentum to attract tourists next year,” Thủy said. 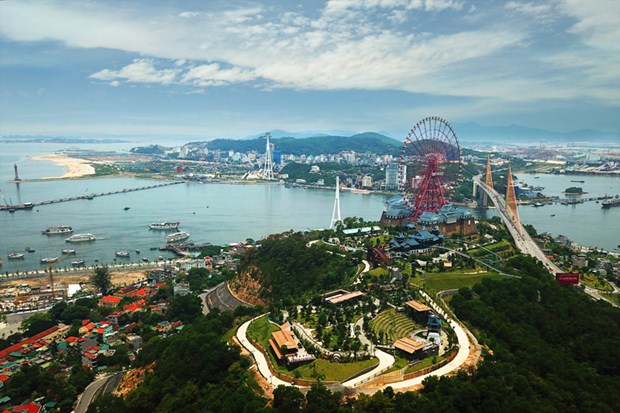 The tourism sector of Quảng Ninh is diversifying its products based on local advantages with a focus on enhancing tourists’ experience towards the goal of becoming a four-season destination.

To achieve this goal, it is implementing a host of solutions, one of which is to continue investing in infrastructure, especially accommodation and tourist sites, in order to create the best services for visitors.

In October this year, Quảng Ninh hosted the 17th General Assembly of the EATOF, which became an opportunity for the province to enhance its linkage with EATOF member countries, contributing to the tourism recovery in the new normal conditions. VNS

TienphongNews
Nearly 597,000 foreigners have visited Vietnam in November, up 23.2% month-on-month, bringing the total number of international tourists to the country in the first 11 months of this year to 2.95 million, according to the General Statistics Office (GSO). Hanoi – Nearly 597,000 foreigners have visited Vietnam in
November, up 23.2% month-on-month, bringing the total number of international
tourists to the country in the first 11 months of this year to 2.95 million,
according to the General Statistics Office (GSO).

The total figure is 21.1 times higher than that of the same
period last year, but down 81.9% compared to the number of 2019 before the COVID-19 pandemic broke out. The country was estimated to earn 536.3 trillion VND (21.6
billion USD) from accommodation and catering services, up 56.5% year-on-year, while
revenue in the travel and tourism industry was estimated at 22.9 trillion VND, a
4.1-fold increase compared to that of the same period last year.

Recently, the Vietnam National Administration of Tourism launched
an email system, the first of its kind, to promote Vietnamese tourism at
https://mail.vietnam.travel./.

TienphongNews
Despite impacts from the COVID-19 pandemic, the number of tourists to Hanoi has so far surpassed the target for the whole year, thanks to the city’s efforts to provide attractive and high quality products. TienphongNews
The southern province of Ba Ria-Vung Tau, which has been known for Con Dao Islands and many beautiful beaches, is working to promote ecotourism, bringing new experiences to visitors in its agriculture and rural areas. Ba Ria-Vung Tau – The southern province of Ba Ria-Vung Tau, which has been known for Con Dao Islands and many beautiful beaches, is working to promote ecotourism, bringing new experiences to visitors in its agriculture and rural areas.

A number of models that combine agricultural production with tourism have been formed in the locality over the past time, Chairman of the provincial Farmers’ Union Mai Minh Quang said, adding that such models offer both clean agricultural products and closed-loop tourism services.

The models have helped to raise the income of local farmers, while contributing to attracting more tourists to the province, he said.

Suoi Giau Agriculture and Fisheries Cooperative in Suoi Rao commune, Chau Duc district, is an example, which has raised fish in natural lakes and turned them into weekend retreats for local holidaymakers since 2019.

After a hiatus due to the COVID-19 pandemic, the cooperative has reopened since August, welcoming more than 100 visitors on weekends, said its Chairman Tran Duc Nghia, noting that the number reached up to 700 last National Day holidays (September 2).

Located at the foot of the Ky Van mountain range in Long Hai township, Long Dien district, the An Binh eco-resort, which is under construction, is also expected to be a new attraction.

After the COVID-19 pandemic, agriculture-based tourism has been proliferating in many Vietnamese cities and provinces, including Ba Ria-Vung Tau, helping it materialise the strategy of green, sustainable tourism.

With a coastline of more than 300km and beautiful sandy beaches and renowned Con Dao Islands, the southeastern province has substantial strength to develop a brand of sea and island tourism.

In the 11-month period from January to November this year, Ba Ria – Vung Tau welcomed around 12 million visitors, equal to nearly 350% of the yearly plan and up 248% from the same period last year, according to the provincial Tourism Department.  The outstanding result is attributable to the province’s efforts to upgrade and diversify its tourism products and services.

Director of the provincial Department of Tourism Trinh Hang said the Ministry of Culture, Sports and Tourism predicted it won’t be until 2025 that tourism nationwide can regain the momentum of 2019 pre-pandemic numbers.

However, given the positive signs recorded so far this year, Ba Ria – Vung Tau could regain pre-pandemic numbers and revenue levels in 2023, he added.

According to leaders of the province Tourism Department, to achieve sustainable development and maintain its reputation as a key destination in the national tourism map, Ba Ria – Vung Tau has always attached importance to building and maintaining a civilized, safe and attractive environment for tourism. All localities in the province have implemented specific and practical measures to ensure that every visitor feels that Ba Ria – Vung Tau is really a civilized, safe and friendly destination./.