The new academic year has begun, but both school leaders and teachers still don’t know what they need to do when teaching integrated subjects. Nguyen Van Luc is a teacher of history and citizen education at the Dien Khanh Secondary School in Khanh Hoa province. He has been assigned to teach history to sixth graders.

Luc said he is drafting lesson plans to prepare for the first teaching period, slated for September 13. History is designed as a part of the integrated learning subject of history-geography, but his school has both history and geography teachers, so each teacher will be in charge of a separate subject.

The teacher is worried about the periods where he has to teach content of both history and geography.

Teachers need to have both history and geography knowledge to be able to teach the integrated subject well.

A biology teacher in HCM City said her school will still assign many teachers to teach the integrated subject of Natural Sciences. This is the best choice for now.

“I will still be able to provide physics and chemistry knowledge to students, but honestly speaking, the knowledge will be summaries, not as detailed as the knowledge provided by the teachers trained to teach these subjects,” she said.

The teacher said if the Ministry of Education and Training (MOET) doesn’t have solutions about teaching staff, she fears that Natural Sciences will be just a combination of three subjects – physics, chemistry and biology.

The headmaster of a secondary school in Nghe An admitted that he is confused when assigning teachers to teach integrated subjects.

“We are seriously lacking teachers, which makes it very difficult to arrange teachers for two integrated subjects – Natural Sciences and History-Geography for sixth graders,” he complained.

“The only difference is that instead of printing lessons in three textbooks, the lessons now can be found in one textbook,” he said.

The headmaster of a school in the suburbs of Hanoi commented that the spirit of ‘integration’ still has not been ensured, because schools were assigning many teachers to teach one subject, Natural Sciences. Garlic and onion farms on the Lý Sơn Islands, off the coast of Quảng Ngãi Province. The islands have been turning to organic agriculture for more sustainable development. Photo courtesy of Lê Xuân Thọ

LÝ SƠN ISLANDS — Organically grown crops have been designated a key part of sustainable development on the Lý Sơn Islands, 30km off the coast of central Quảng Ngãi Province. Lý Sơn garlic and onions are popular throughout the country.

However, the transfer to organic farming faces hurdles from low productivity, a lack of policies supporting farmer-business partnerships and poor protection of the Lý Sơn garlic brand, which is discouraging farmers from organic farming.

Although earning Geographical Indication (GI) status, organic garlic and purple onion farms occupy less than one per cent of the islands’ total 330ha of farmland.

Farmers on the islands are still hesitant to transfer from traditional agricultural practices to organic farming, fearing low productivity, high production costs and an unstable market. Farmers begin a new garlic crop in Lý Sơn Islands. The Islands’ agriculture will be going ‘green’ for a better environment and income in the coming years. Photo courtesy of Phạm Văn Công

Phạm Văn Công, CEO and founder of the DORI Joint Stock Company, said only 10 farmers over 3ha are have started organic garlic farming since 2016.

“It takes at least three years to clean the chemically contaminated farmland with bio-fertiliser, manure, humus and grass, and absorbing ‘green’ nutrition,” he explained.

“Local farmers do not have enough financial reserves to last the first years of preparation for organic-based farming,” he said.

Công also said that strong farmer-business partnerships have not yet been built to make organic farms larger on the islands. A report from the islands’ People’s Committee said farmers produce 2,500 tonnes of garlic and 6,500 tonnes of purple onion per year, with an annual revenue of VNĐ200 billion ($8.8 million).

Chairwoman of the Lý Sơn Islands District People’s Committee, Phạm Thị Hương, said traditional farm produce (garlic and purple onion) does not have a stable market price due to poor connections between the islands and mainland.

She said the COVID-19 pandemic has kept more than 100 tonnes of garlic on the island, and the price offered was below VNĐ30,000 per kilo.

A few years ago, the islands original garlic suffered unfair competition from garlic produced in other provinces like Khánh Hòa and Bình Thuận. Garlic roots from an organic farm on the Lý Sơn Islands of Quảng Ngãi Province. Garlic is one of the most famous exports from the islands. Photo courtesy of Dori

The islands, known as the Kingdom of Garlic in Việt Nam, have around 22,000 inhabitants, of whom 73 per cent make their living from farming garlic and spring onions, alongside fishing.

Farmers grow garlic on terrain that formed from volcanic eruptions 25 to 30 million years ago, creating the special scent that the Lý Sơn garlic is famous for.

Traditional farming methods rely on chemicals and the over-use of natural resources, though islanders have gradually begun to recognise the dangers of environmental pollution, exhausted soil and high saline intrusion.

Local farmers on the islands have been encouraged to apply safe farming techniques that use bio-fertiliser and bio-pesticide, rather than continuing to exploit coral sand and basalt soil as before.

The first ‘green’ crop only collected 30 per cent of the traditional capacity, but yields doubled after the second and third years. Organically produced garlic also fetches a higher market price.

Traditional farming requires at least 40 tonnes of chemical fertiliser and leads to 10,200cu.m of farm soil being dumped for every garlic crop produced. The 3,000sq.m dumpsite for agricultural waste on the islands was overloaded. The cost of cleaning the chemically contaminated farm soil stands at VNĐ20 billion each year, a report from the islands’ committee unveiled.

On top of this, farmers often mix sand from coastal coral reefs and basalt dug up from defunct volcanoes, which has led to serious coastal erosion and damage to the ancient volcanoes – one of the biggest tourist attractions on the island.

Võ Trí Thời, an official from the district’s Peoples’ Committee, said the islands plan to develop 100ha of VietGAP farms that promote using compost and bio-fertiliser, instead of chemical agricultural material. Garlic products, including wine, dried garlic and black garlic, on sale at a shop in Quảng Ngãi Province. Photo courtesy of Dori

“Farmers can not find support to help them survive the low output of the initial three years of changing from chemical-based agriculture to organic farming. Organic farm produce also needs sales promotions, brand protection and respect in the market,” Công said.

He agreed that organic agriculture is not easy, but success is still ahead.

“I do hope more farmers will follow our organic demonstrations to turn the islands green.”

The islands have been designed as a ‘zero’ carbon and eco-tour site, through the promotion of renewable energy projects like solar, wind, tide and desalination, which turns seawater into freshwater. — 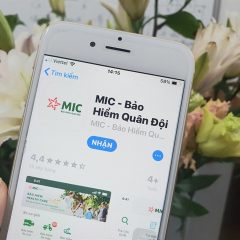