A group of students from Ly Tu Trong College (HCM City) came up with an idea to integrate UVC light in refrigeration units to eliminate viruses and bacteria, including SARS-CoV-2.

“We were installing cooling appliances for supermarkets as part of our internship. During this time, we noticed that there were micro-organism clusters in the cooling systems,” Nguyen Duong Thanh said.

“We then tried to figure out how the cooling appliances could still function as usual while minimising the amount of bacteria and viruses on its surfaces. Integrating UVC light was the optimal option.”

Their work was praised for its practicality at Startup Kite 2021, a start-up idea contest for vocational school students.

Based on the project, the group established a cleaning service company specialising in cooling appliances, prior to the contest.

“Establishing a company makes it easier to receive orders and install the device. It is also our opportunity to apply our idea into reality,” said Thanh.

What’s even more remarkable is that the integrated UVC light can eliminate SARS-CoV-2 on the surfaces of the cooling systems.

This practical feature has earned them their very first orders from Cho Ray Hospital, Hoan My Hospital and the People’s Hospital 115.

“It can also reduce electricity use and periodic maintenance costs.”

The project has received VND1 billion (US$43,878) in funding (equivalent to an 8 per cent share) and is under negotiation for another VND1 billion of investment.

Entering Startup Kite 2021, the group hoped to get more investment to scale up their production.

According to Hoang Van Viet, deputy head of the Refrigeration Department of Ly Tu Trong College in HCM City, the major advantage of the idea is that UVC light can be integrated into all types of cooling devices, especially air conditioning systems in supermarkets, hospitals and factories.

The modest cost to install UVC light (about VND1.4 million) is also a plus point in real-life operation.

Talking about future goals, Thanh said the company had already set out plans for the next three years.

HCM City and the surrounding provinces will be the centre of their focus in 2022.

In the following years, they will concentrate on product distribution and collaborating with partners and distributors to provide their services on a larger scale.

According to Techinasia, Vietnam-based bank Timo has raised $20 million in an investment round led by Square Peg.

This is a famous investment fund that has invested in technology unicorn projects such as Canva, FinAnce and Airwallex.

In addition to Square Peg, Jungle Ventures, Granite Oak, Phoenix Holdings and several other angel investors also participated in this funding round.

This is Timo’s first fund-raising round. Proceeds from investors will be used to develop the base technology, with a focus on products specific to the Vietnamese market.

Established in 2015, Timo is a provider of digital banking services that enables users to make payments and participate in other financial services without having to go directly to a bank branch. Timo users can even open a bank account without going to a bank for registration.

Timo’s successful funding round comes in the context of increasing digital banking products in Southeast Asia, especially in Vietnam.

According to McKinsey & Company Vietnam, the percentage of service users of Fintech (financial technology) companies in Vietnam increased from 16% in 2017 to 56% in 2021.

The popularity of e-wallets and Fintech in Vietnam is higher than the average of emerging markets in the Asia-Pacific region and even higher than some developed countries.

Cash is still the “king” in all payment segments in Vietnam. However, the openness of Vietnamese users to e-commerce is very high. Consumers are willing to spend digitally, even with complex financial products involving mortgages, investments, and insurance policies.

McKinsey & Company also said that the scale of Vietnam’s digital ecosystem is estimated at 50 billion USD and can increase to 100 billion USD by 2025.

Before Timo, another Fintech startup in Vietnam – MoMo – announced the completion of the 5th round of funding (Series E) with a total investment of about 200 million USD. This deal also turns MoMo into a technology unicorn when it is valued at up to 2 billion USD.

The Covid-19 pandemic has contributed to promoting the development of digital payments in Vietnam as both people and businesses have formed awareness and understood the value of cashless payments. The habit of non-cash payments will not only be maintained but also will continue to be promoted in Vietnam in the post-pandemic period.

The T63 information portal – the digital stories of 63 cities and provinces – has been launched by MIC at T63.mic.gov.vn. This is the place for localities to share their experiences during the digital transformation process. The Ministry of Information and Communications (MIC) recently organized an online conference to share and disseminate experiences on digital transformation, connecting with 63 local departments of information and communications.

The stories are about the application of Party Member Handbook platform; provincial digital transformation model in LangSon; the deployment of information system that serves safe, flexible adaptation and effective control of the pandemic in HCM City; AI switchboard solution to advise and support F0s at home; and QR Code travel permit application in Da Nang.

Deputy Minister of Information and Communications Nguyen Huy Dung said digital transformation is a story of 63 cities/provinces, more than 700 districts and over 11,000 communes.

With the viewpoint ‘success comes from sharing’, MIC built an information portal for 63 cities/provinces to share their stories at T63.mic.gov.vn.

Each article must not contain more than 1,000 words and each clip must not be longer than 12 minutes.

He went on to say that he expects to listen to stories about topics which were still not related at the conference, such as digital transformation at people’s councils at different levels; digital skill training; the tools and platforms that help localities go digitized; and the use of data to make important decisions.

MIC has asked the International Cooperation Department and Authority of Information Technology Application to upgrade the website to make it more convenient to use so that users just make one click to share their stories on many social network platforms. This will also be a repository of original stories for central and local media agencies to build reports and infographics to contribute to the sharing of information.

At the conference, the Authority of IT Application introduced training courses on digital information to be provided to 10,000 officers at state agencies and media agencies. The training is expected to begin in March 2022. Four major issues would be mentioned in the training, including 1/ heightening awareness about digital transformation 2 /digital government 3/ digital economy and 4/ digital society. A member of the Chàm Island’s Marine Protected Area (MPA) management board releases an endangered tortoise. Seven turtles were rescued by local farmers in 2021. — Photo courtesy of Chàm Islands MPA

CHÀM ISLANDS  — The Chàm Island’s Marine Protected Area (MPA) management board and Quảng Nam provincial rangers have released an endangered turtle to the local forest, three days after it was captured by a local farmer and handed to the MPA.

Huỳnh Thùy Hương, an MPA communication employee, told Việt Nam News that the Chinese strip-neck turtle (Mauremys sinensis) was found by Trương Công Tánh at a paddy field in Điện Bàn Town in Quảng Nam Province on January 14, who gave the turtle to the MPA.

The 1.5kg, 24cm shell turtle, which is listed in the International Union for Conservation of Nature as a critically endangered species, was returned to the wild on January 20. According to MPA, seven tortoises and sea turtles, handed in by locals, have been released in the Chàm Islands in 2021.

The Chàm Islands-Hội An (including the total area of the Islands’ land and water and Hội An) was recognised as a World Biosphere Reserve in 2009. It is home to a large population of sea turtles and tortoises.

The MPA also reported that nearly 1,000 baby turtles had been released into the ocean in 2017-19 since the ex-situ hatching (moving turtle eggs to another place for hatching) conservation project was launched in 2017.

The Chàm Islands is the only successful site for the ex-situ turtle eggs hatching project in central Việt Nam. — 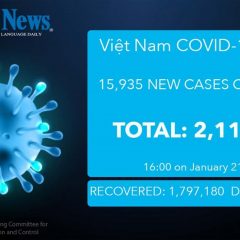