Sacred Night – Live Like A Flower tour is held at 7pm every weekend nights. Photo hoalo.vn

HÀ NỘI — A new tour of exploring Hỏa Lò Prison has been launched every weekend since October to honour female revolutionaries whose sacrifice contributed to the overall victory of the national revolution.

Sacred Night – Live Like A Flower is held at night so that visitors can experience horrifying imprisonment in the dark, the oppressive atmosphere of the cells and the persecution of the guards during the wars.

In such harsh conditions, the fighting spirit and noble sacrifices of the female fighters whose optimism outweighed the shackles were clear to see.

After being equipped with a digital tour guide device, tourists will embark on their exploration of Hỏa Lò Prison, which used to be dubbed “Hell on Earth”, and learn about the terrible living conditions and touching life stories of the female prisoners who were detained there from 1930 to 1954. They will also be accompanied by a human tour guide.

The first stop is the main gate, which represents the boundary between life and death, between shackles and desire for freedom.

The images of the mothers and sisters with perseverance and courage are revealed via vivid stories, memorabilia and archives, illustrated by lively scenes performed by the employees of the prison museum with the aid of modern light and sound technologies. The tour enables the visitors to experience the harsh living conditions and stuffy confinement in Hỏa Lò Prison in the past. — Photo hoalo.vn

She was the owner of a rice shop at 20 Cửa Nam Street where Vietnamese patriots often gathered to discuss a poisoning plot (June 27, 1908) that aimed at the French colonial army garrison in the Citadel of Hà Nội.

However, the plot failed. Ba was captured and kept in Hỏa Lò Prison where the guards brutally tortured her for the information. In the end, she died from a severe beating and serious sickness, becoming a symbolic example of a Vietnamese female martyr.

“This is the first time I have learned about the female prisoner’s life with harsh conditions, constant torture, diseases and basic shortages; however, they never lacked a firm will and positive spirit,” said Trần Minh Anh, a teacher from Hà Nội.

“The message from such experience is also simple: The previous generations have shed bones and blood to obtain the national independence and freedom. Today’s generations, therefore, should look back to the past to appreciate the value of peace, to cherish human love, and to do better things for the future,” she said. Scenes are set up to illustrate the stories associated with female prisoners. — Photo hoalo.vn

The tour ends with a memorial ceremony held at the monument to pay tributes to fallen revolutionaries.

They can also take home souvenirs made from the country-almond trees like dried almond inscribed with the logo of the prison, the dried leaf inscribed with poems of patriotic soldiers or a bookmark with the image of the main gate. 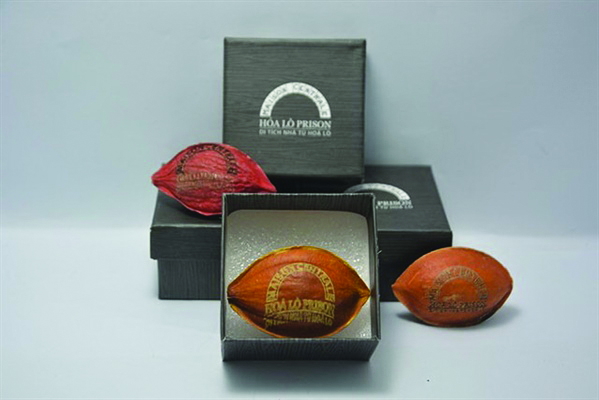 Dried country-almonds inscribed with the logo of the prison are original souvenirs of Hỏa Lò Prison. — Photo baovanhoa.vn

According to Nguyễn Bích Thủy, head of the management board of the relic, the programme has been thoroughly studied and structured, aiming to honour the spirit and sacrifice of female fighters who kept their faith with revolutionary ideals.

The programme is part of co-ordination between the management board of Hỏa Lò Prison Relic and Hanoitourist Travel Company, and is held from 7pm every weekend night. —

Related Topics:destinationtourismtourism productsTravel
Up Next 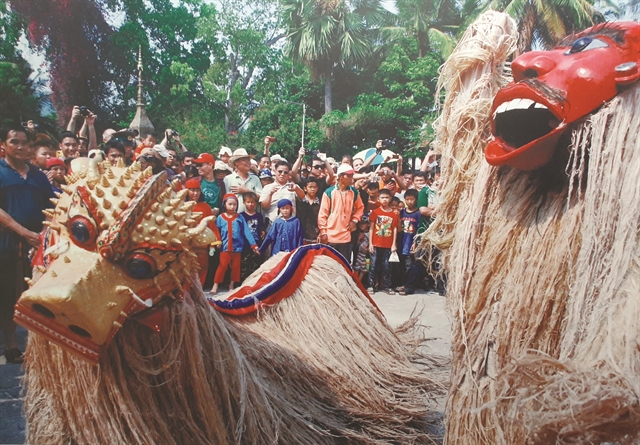 HÀ NỘI — Photos focusing on the friendly relations between Việt Nam and Laos have been put on display in Hà Nội.

The exhibition by the Ministry of Culture, Sports and Tourism and Lao Embassy in Việt Nam is running from December 1 to 5 at the Hồ Chí Minh Museum.

The first part introduces the historical and up-to-date images on the relationship between the two countries in the struggle for national liberation in the past and process of national renewal and construction today.

Through the photos displayed in this part, exhibition goers will see the determination of the two parties, two states and peoples to foster the relationship between the two countries.

One of the photos in this part featuring Vietnamese martyr Lê Thiệu Huy and his comrades shows that the sacrifice of Vietnamese in helping Laos gain independence and freedom must not be forgotten.

Martyr Huy sacrificed himself as the shield to protect President Souphanouvong in the Tha Khet battle on March 21, 1946.

Another image shows the solidarity of the two people featuring Vietnamese soldiers and Lao people crushing rice grains for the Thượng Lào campaign in 1953.

The second part will showcase photos of late Lao President Kaysone Phomvihane from his early patriotic activities and his contribution to his country’s unification and development.

“The exhibition is a meaningful activity to remind people of the two countries to boost the traditional relationship between Việt Nam and Lao,” said Deputy Minister of Culture, Sports and Tourism Tạ Quang Đôngat the exhibition opening ceremony.

“Việt Nam is proud to have a loyal friend like Laos. This exhibition is a chance to review the close relations between the two countries and towards sustainable co-operation in future.”

“It expresses the Vietnamese people’s warm heart and feelings to their friends. The exhibition will be a chance for young generations to get to know more about the traditional friendship and love between the two peoples.”

“We will never forget the support from Vietnamese Party, Government and people,” he said. “Now we are still going forward side by side in the development process together with other countries in the region and the world.”

The exhibition also displays photos featuring beautiful landscapes and cultural values from the Land of a Million Elephants.

The exhibition aims to celebrate the 45th anniversary of Lao National Day and the 100th birthday of the late Lao President Kaysone Phomvihane.

All Vietnamese who have legal capacity can light up fireworks for some special events such as Lunar New Year festivals, birthdays, and wedding ceremonies, pursuant to an amended government decree that will take effect on January 11.

The government issued Decree No. 137 on November 28 on the management and use of fireworks, adding some specific situations where citizens are allowed to use fireworks on personal occasions.

As per Article 17 of the decree, all institutions, organizations, enterprises, and individuals with legal capacity are allowed to light up fireworks during public holidays like Lunar New Year festivals, the death anniversary of Hung Kings, National Day (September 2), the Dien Bien Phu victory anniversary, and Reunification Day (April 30).

It is worth noting that the fireworks allowed are the kind that will not explode.

Other events will be subject to approval of the prime minister.

Both organizations and individuals are required to buy fireworks from authorized factories and enterprises under the guidelines of the decree.

In addition, the decree also stipulates behaviors that are strictly banned in the management and use of fireworks.

Vietnamese law prohibits all of activities related to the production, trading, transportation, import, export, storage, and use of firecrackers and fireworks and materials thereof, except for some specific cases.

The decree excludes enterprises and organizations that are under the control of the Ministry of National Defense and authorized by the government to research, produce, import, export, supply, transport, and use fireworks.

People can use fireworks produced or imported by the Ministry of National Defense or authorized organizations for firework displays.