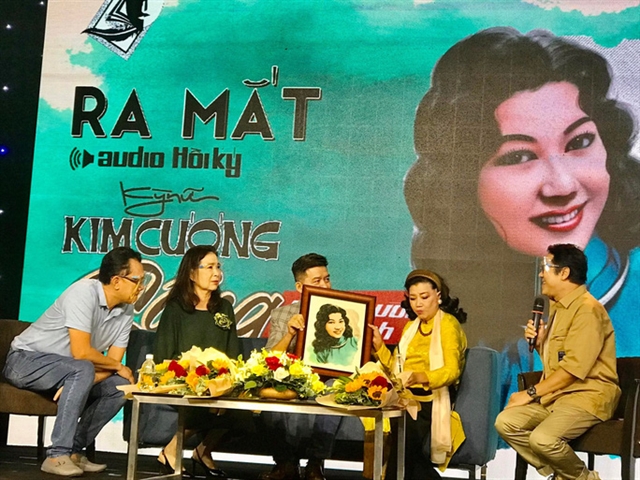 People’s Artist Kim Cương (2nd right) at the launch of her audiobook biography titled ‘Sống Cho Người, Sống Cho Mình’ (Live for People, Live for Myself), in HCM City, on March 25. Photo courtesy of the producer

HCM CITY— The biography of People’s Artist Kim Cương, a cải lương (reformed drama) doyen with 65 years’ experience in the art genre, has released an audiobook of her biography.

Sống Cho Người, Sống Cho Mình (Live for People, Live for Myself), written and recorded by Cương in co-operation with her friends, was released in HCM City last week.

Apart from featuring the artist’s life and career from a personal perspective, the audiobook  also outlines development of traditional theatre between the 1950s and 1990s

“Cương’s audiobook, Sống Cho Người, Sống Cho Mình, tells us about the challenges and sacrifices that the actress has made in pursuing cải lương. I think the book will help theatre lovers learn about the art in particular and Vietnamese culture and lifestyle in general,” said drama actor-director Thành Lộc.

Lộc and veteran theatre performers Hữu Châu and Kim Xuân have been invited to work on the production.

In her interview with media on the audiobook’s launch, Cương, 84, said: “Cải lương (reformed theatre genre of the southern region) is still alive after a century. My younger colleagues are working to preserve and develop the art.

“I hope my biography audiobook , will help fans understand why and how cải lương is part of the spirit of Vietnamese people.” Born in to a family of theatre artistes in Sài Gòn (now HCM City), Cương’s love for cải lương came through her parents, the late talented performers Nguyễn Phước Cương and Bảy Nam, owners of the Đại Phước Cương Troupe, one of the region’s leading troupes.

She started her professional career when she was 17, performing with her mother and actresses Phùng Há and Năm Phỉ, who are recognised as some of the region’s most talented cải lương performers.

In the 1960s, Cương became involved in modern drama and worked to combine it with cải lương.

She later established the Kim Cương Drama Troupe that grew to have more than 70 actors as its members. They performed dozens of plays written by Cương, mostly on the topics of women, love, family and social problems in the south.

Cương wrote and directed 50 plays during her career, most of which highlighted southern women and their character.

Two of her most famous works, Lá Sầu Riêng (Durian Leaf) and Bông Hồng Cài Áo (A Rose for Mother), released in the 1970s-80s, are still fresh in the minds of art lovers and have been staged many times by troupes across the country.

Last year, A Rose for Mother, a production on motherly love, was aired on the Hồ Chí Minh City Television’s HTV9 channel to encourage health workers and residents of the city in the COVID-19 fight.

Fans can learn about Cương and her art  by visiting the https://kynukimcuong.vn website. –

Hùng Kings’ commemoration to be marked at home and abroad