For the first time, veteran theatre artists are on a par with young actors at the 2020 Mai Vang (Golden Apricot) Awards, one of the country’s most prestigious art awards presented by Nguoi Lao Dong (The Labourer) newspaper in HCM City.

This year, four veteran artists have been nominated for the awards, signalling a break with tradition. Previously, it was an unwritten rule that only young performers were highlighted at the awards show. Meritorious Artist Thanh Loc (first from the right) of the IDECAF Drama Troupe has worked on a series of dramatic plays for children. Photo courtesy of the producer

The annual awards, first organised in 1995, have become popular among millions of people and Nguoi Lao Dong readers, including many farmers, workers and students who have voted via mail or internet for their favourite singers, composers, fashion designers, and movie and theatre artists and directors.

While the organisers are still working hard to count the votes, which began last month, audiences are predicting wins for one of four theatre actors, Thanh Dien and Huu Chau of cai luong (reformed opera), and Thanh Loc and Thanh Hoi in drama.

The long-term project began in 2016 after 15 years of writing, recording and filming by Dien and his young staff. It has received support from the HCM City Television and HCM City Theatre Association, as well as from many young and veteran performers from the city and southern provinces.

Famous extracts from historical plays performed by veteran artists in the 1950s and 1970s are featured through the project. Original traditional tunes of cai luong are highlighted.

“I was interested in the way Dien performs and uses his art to send messages to audiences through the stage. He mixed Vietnamese theatre with modern drama into his show. Dien has a good chance to capture the top award for the year’s Best Theatre Male Actor,” he added.

Loc has worked as an actor, director and producer for a series of drama plays for children.

His latest production, Tam Cam (Tam and Cam), made its debut in June and was a new version 20 years after its first release by IDECAF.

The 120-minute musical work’s theme centres on love, honesty, betrayal and justice. It is based on the fairy tale of the same name, considered to be the Vietnamese version of Cinderella.

In the play, Loc, one of the region’s few professional comic actors, once again showed his acting skills.

“I was very happy to see that parents and their kids are captivated by our musical, which is still new for Vietnamese kids. I cried in joy while my audiences screamed and laughed at the show,” said the play’s producer Loc, who also plays a lead role.

Loc, 58, spent several hundred million dong on restaging the play, and urged his staff “not to make mistakes”.

A series of new songs and colourful images are used. Costume designers and specialists in sound and light added a realistic element to the play through beautiful clothes, accessories and interior design.

Loc’s fans expect that Tam Cam will help the actor win at the 2020 Mai Vang Awards.

Actors Chau and Hpi have had successful changes in their career, and have also worked to train young talents.

The 2020 Golden Apricot Awards’ vote count will close in December and the presentation show will take place early next year. 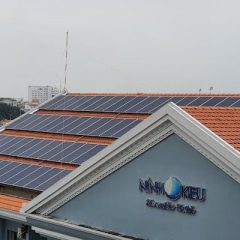