Vietnam moved one step closer to the semifinals of men’s football, which is for under-23 players, at the 31st Southeast Asian (SEA) Games after sealing a 1-0 victory over Myanmar in Group A on Friday night.

The chance for a berth in the semifinals was open to four teams Myanmar, the Philippines, Vietnam, and Indonesia in Group A before Friday’s fixtures.

Just three minutes after the game began, a moment of distraction put Vietnam’s defense in danger as Lwin Moe Aung ran up to face goalkeeper Nguyen Van Toan, who was able to save the shot.

Vietnam started pushing forward, but their crossing strategy did not work.

The Golden Stars struggled to find Myanmar’s net despite creating many chances in the remainder of the first half while the visitors maintained the pressure and even had a few dangerous counter-attacks.

The hosts tried various attack plans after the restart but it was not until the 75th minute that Vietnamese players were able to score a breakthrough goal.

Le Van Do ran down the right flank and made a pass to captain Do Hung Dung, whose clinical finish stunned both Myanmarese goalkeeper Pyae Phyo Thu and two other defenders.

The heavy rain at Viet Tri Stadium in northern Phu Tho Province made it tougher for both sides.

The score remained 1-0 until the final whistle.

The victory saw Vietnam ascend to the top of Group A with seven points while Myanmar fell to third place with six points, preceded by Indonesia with six points after overwhelming the Philippines 4-0 in another fixture earlier on Friday.

Vietnam had beaten Indonesia 3-0 on May 6 and drawn 0-0 against the Philippines on May 8.

The Vietnamese will face Timor Leste on Sunday night.

The men’s football event at the 31st SEA Games features two groups, with the five aforementioned teams making up Group A while Group B includes Malaysia, Singapore, Thailand, Cambodia, and Laos.

The top two teams in each group will play in the semifinals.

The 31st SEA Games, which boast 526 categories in 40 sports, are currently taking place in Hanoi and 11 neighboring provinces and cities and will run until May 23.

The biennial event was originally scheduled to be held from November 21 to December 2, 2021 but was postponed after Vietnam saw a flare-up of COVID-19 cases in late April the same year.

Over 7,878 athletes, coaches, and members of 11 sports delegations in Southeast Asia have registered for the event. Nguyễn Ngọc Diễm Phương (in white) competes with Myat Neo Wai Chu of Myanmar in the mixed event at the SEA Games 31 on May 22. VNA/ Photo Quang Quyết

HÀ NỘI — The Thai judokas brought home the gold medal in the mixed event on May 22.

The event was held at Hoài Đức Gymnasium in Hà Nội.

In the final, Thailand competed with Indonesia with six pairs of athletes in six weight classes. Thailand defeated Indonesia 4-2 to take the gold.

Although it rained heavily, many fans came to the gymnasium to cheer for the martial artists.

After five days of competition, Việt Nam topped the team’s rankings with nine gold, one silver and three bronze medals.

Head Coach of the Vietnamese judo team Nguyễn Duy Khanh expressed his satisfaction with the efforts and results of the Vietnamese team. After the SEA Games, the athletes will prepare for the Paris 2024 Olympic qualifiers. The image of Uncle Hồ was depicted faithfully in the play “The 72nd Letter”.  — Photo courtesy of Lệ Ngọc Theatre

HÀ NỘI — The newly premiered play ‘Lá đơn thứ 72′ at Lệ Ngọc Theatre evoked strong emotions in the audience due to its accurate depiction of President Hồ Chí Minh, who always fought for the underprivileged.

Hoàng Thanh Du, the play’s author, said that it was based on real documents of lawyer Nguyễn Trọng Tỵ,  former Judge of the Supreme People’s Court, who helped clarify many wrongful conviction cases.

‘Lá đơn thứ 72′ (The 72nd Letter) tells the story of Đỗ Minh, a Party member and former local official who was sentenced to eight years in prison for murder.

To prove his innocence, Minh penned a series of letters pleading for help while in prison. After 72 consecutive letters, his request reached President Hồ Chí Minh.

Uncle Hồ then sought a re-investigation of this case after noticing Minh’s compliance with prison regulations and his practice of setting aside a small amount of money to pay the Party fee.

He believes that for a Party member with such strong faith in the Party, his sentence may be unjust.

People’s Artist Lê Tiến Thọ, who participated in the staging of the play, said that this is one of the theatre’s best scripts depicting President Hồ.

The creative team faced a significant task, in his opinion, in conveying the message to follow Hồ Chí Minh’s thought, morality and lifestyle on stage.

“We try to set up the stage, get the sound, light, actors’ performances, and artists’ language to work together so that the audience, especially young people, can enjoy this play. Hopefully, it will be a special theatrical work to celebrate the 132nd anniversary of President Hồ Chí Minh’s birthday,” Thọ said.

People’s Artist Vương Duy Biên said when reviewed the screenplay, he envisioned a tranquil Hà Nội from previous decades on the stage.

Biên added that he was touched when he read documents about Uncle Hồ’s trips and will aim to faithfully portray Hồ Chí Minh on stage.

It’s a play of history and mystery, written with the aim that the young generation can appreciate this unique heritage more.

The drama recreates the Lý dynasty’s golden era through the story of the One Pillar Pagoda’s foundation.

The image of King Lý Thái Tông, the second king of the Lý dynasty, stands out. He thought that the country and its people should be ruled with humanity in mind.

The show also helps people learn more about the One Pillar Pagoda, which is a unique symbol of Buddhist culture in Việt Nam.

With intricate staging, fascinating scripts, and captivating plots, the two theatrical pieces are certain to evoke unforgettable feelings in the audience. VNS HÀ NỘI — State leaders have congratulated the Vietnamese women’s football team on winning the gold medal on May 21.

President Nguyễn Xuân Phúc praised Huỳnh Như and her teammates for their successful competition, which brought endless joy to fans throughout the country. President Phúc also praised coach Mai Đức Chung, the coaching staff, and the players for their accomplishments.

He thanked the sports fans for bringing the love of sport and national pride together at Cẩm Phả Stadium and across the nation, creating spiritual strength for the “female warriors” to go through each match, especially the final, to bring glory to the country, and pride for Vietnamese women’s football.

PM Chính expressed his delight that the players successfully defended their top place at the SEA Games for the seventh time.

“With courage, determination, and intelligence, the women’s football team once again shone and contributed an outstanding gold medal to the 391 SEA Games medals of the Việt Nam delegation,” he wrote.

PM Chính congratulated the women’s football team on their victory and emphasised that it would inspire the Vietnamese sports delegation to be more determined and succeed in upcoming competitions.

According to Tuấn, the VFF decided to award VNĐ2 billion (US$86,000) to the Vietnamese women’s team following their final match. He stated that it was a miracle accomplished by Vietnamese players under the intelligent direction of head coach Mai Đức Chung.

The total reward for the Vietnamese women’s football team for the final night has reached VNĐ7.6 billion ($328,000). — 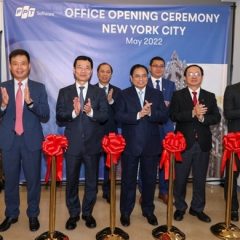