Vietnam will plant 20,000ha of forests as part of a project to protect and develop coastal forests in response to climate change and to push green growth over the next 10 years.

The project has been approved by Deputy Prime Minister Le Van Thanh, to achieve sustainable management, protection and use of existing and newly planted forests between now and 2030.

It also aims to effectively promote the role and functions of forests in coastal defence, environment protection and coastal infrastructure systems as well as prevent desertification and land degradation while conserving biodiversity, reducing greenhouse gas emissions as well as creating jobs for people in coastal areas.

The project will also contribute to socio-economic development, protecting the environment, strengthening national defence and security, while reducing natural disasters and effectively responding to climate change and the rise of sea levels.

Recovering and developing coastal forests are among the main tasks in the 10-year period. Among the 20,000ha to be planted, 11,000ha will be grown in the first five years.

Vietnam will also enhance the capacity and development of livelihoods for communities and local people who help protect the forests.

To achieve these targets, the country will strengthen communication work to raise awareness of the roles and values of coastal forests, develop seedlings for afforestation, protect and develop mangroves especially in Mekong Delta region, and grow forests to combat sand storms, among many others.

According to a report of World Bank, Vietnam is highly vulnerable to sea level rises and storms along the coast, highlighting, the critical importance of mangrove and coastal forests.

Related Topics:Climate changefeatured
Up Next

Torrential rain to hit the northern, central region from Wednesday The Vietnam Security Summit 2021 will be held via videoconference on October 27-28, with the participation of about 800 delegates across various fields.

Endorsed by the Ministry of Information and Communications, it is the largest annual cyber security conference and expo in Vietnam.

Themed ‘Cyber Security in the Digital Age: Challenges and Solutions’, the event offers chances for policymakers, experts and security solution companies at home and abroad to meet and share experience so as to improve capacity to cope with risks in cyberspace, protect information system in digital transformation, and develop e-Government.

A virtual exhibition on cyberspace safety is to be held in the framework of the event, which will be attended by more than 20 leading security solution providers of the region and the world such as Kapersky, Viettel Cyber Security and Cloudflare.

More information of the event can be found at www.securitysummit.vn./. 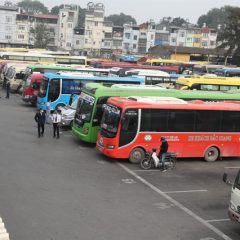