IRED launches “The Story of Civilization” book series in Vietnamese

HCMC – On October 22, the IRED Institute of Education launched the “The Story of Civilization” book series by Will Durant and Ariel Durant, one of the most popular and successful book series about history, in Vietnamese.

The 11-volume set of books was written by husband and wife Will and Ariel Durant in more than five decades. With a total of up to 50 books, “The Story of Civilization” covers 2,500 years of the history of humans.

“IRED worked very hard to earn the rights to translate the entire set into Vietnamese, aimed at helping not only scholars, historians and researchers but also all readers in Vietnam have better access to knowledge about typical civilizations throughout history,” he said.

According to Trung, the book set is like a history dictionary, so the readers do not need to read the whole set but can pick any books about the civilizations they are interested in.

Durant said his purpose of writing the series was not to create a definitive scholarly production but to make a large amount of information accessible and comprehensible to the educated public in the form of a comprehensive composite history.

It depicts all aspects of every civilization, from wars to cultural heritage, great persons, religions, literature, science, philosophy, arts and even the rise of mass media, which contributed to the formation, development and also the collapse of the civilizations.

The series won a Pulitzer Prize for General Nonfiction in 1968 with the 10th volume titled “Rousseau and Revolution”. Will Durant was then awarded the Presidential Medal of Freedom in 1977.

IRED has released three volumes of the series, including the first volume “Our Oriental Heritage”, the 10th volume “Rousseau and Revolution” and the 11th volume “The Age of Napoleon”. Other volumes are expected to be published until 2022.

The nostalgia of cốm the flavour of autumn 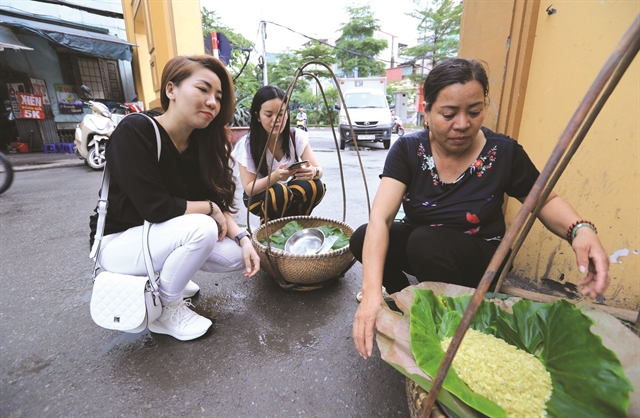 It is also time for women from Vòng Village in Dịch Vọng Ward, Cầu Giấy District to produce and sell their cốm (green sticky rice) – one of Hà Nội’s culinary specialities.

For most Hanoians, cốm and its related products made in Vòng Village are among the capital’s most important flavours of autumn, packed full of nostalgia. It is a symbol of gastronomy and elegance due to its a signature colour, flexibility and flavour which cốm from nowhere else can compete with.

The delicate but fragrant green grains reflect the labour, love and passion of the rice growers and cốm producers. It seems to be able to deposit the essence of the earth, the heavens, the scent of sunshine and wind. Many have said staying in the capital without savouring cốm would be a major shortcoming of a Hà Nội experience.

How cốm comes to life

Legend has it that one autumn a thousand years ago when farmers in Vòng Village were going to harvest their sticky rice, a storm came and caused huge damage to the crops.

The villagers tried to pick the remaining green rice from the storm-torn paddy fields and brought it home to stir fry. Cốm is wrapped into two layers of lotus leaves so that it doesn’t dry out. The lotus leaves’ fragrant aroma will also help preserve the rice’s colour and freshness. — VNA/ Photo Thành Đạt

The rice became a newly-invented dish and had helped them survive through hard days. Through generations, locals added more skills during the processing of cốm until they found it tasted so good that it eventually became more perfect and even went beyond the village to win the favour of all the citizens.

Ever since then, villagers have made cốm every autumn when the green rice is ready to harvest.

To make cốm, villagers work hard from about 5am to pick green sticky rice jewelled with dew. 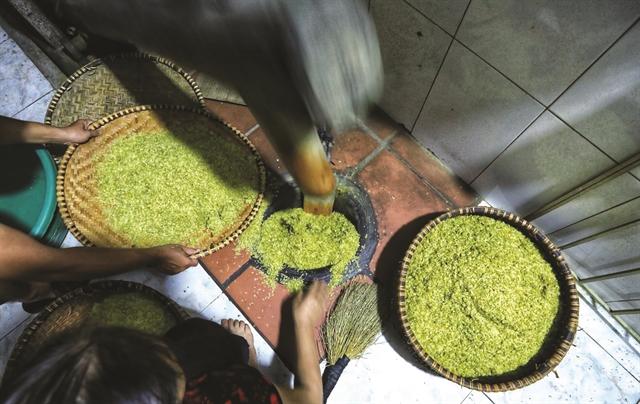 To make cốm, villagers start from bright and early in the morning. — VNA/ Photo Thành Đạt

Skill and hard work are needed to make authentic cốm flat, lime-green, chewy, sticky and smell pleasant like the scent of green rice, so many of the makers have to learn how to make cốm from a very young age.

The speciality is sold by street vendors or in shops. It can also be found on the breakfast or buffet menu of many hotels in Hà Nội.

There are also cốm cakes – a Vietnamese must-have for happy occasions, including weddings and Lunar New Year. — 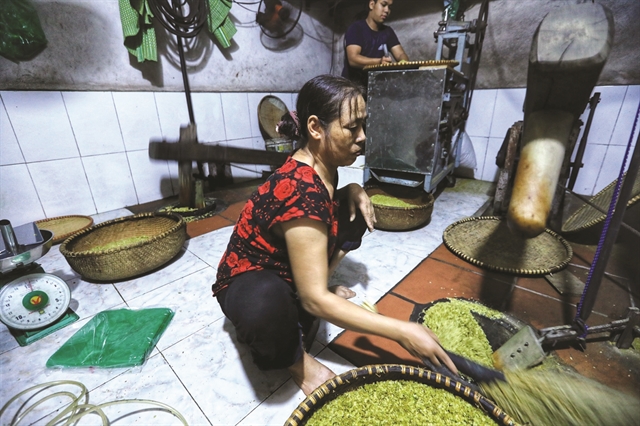