HÀ NỘI — ASEAN and China on Monday upgraded their ties to a comprehensive strategic partnership.

Chinese President Xi Jinping has announced the establishment of the China-ASEAN comprehensive strategic partnership as he chaired the Special Summit to Commemorate the 30th Anniversary of China-ASEAN Dialogue Relations via videoconference.

Leaders of ASEAN member states highly appreciated the fact that General Secretary and President of China Xi Jinping attended the Summit between ASEAN and China for the first time, demonstrating the concern and respect of China’s top leaders for ASEAN.

Welcoming the important achievements since 1991, the two sides assessed the ASEAN-China relationship as a mutually beneficial, dynamic and substantive partnership. The announcement of the establishment of the Comprehensive Strategic Partnership by ASEAN and China demonstrated the important results achieved in the comprehensive cooperation between the two sides over the past 30 years.

Speaking at the summit, PM Chính said the new partnership framework was indicative of the outcomes of cooperation between the two sides over the last 30 years.

ASEAN and China should continue consolidating strategic trust and fostering comprehensive cooperation in order to amplify past achievements and achieve greater goals and benefits in their bilateral ties.

Voicing support for major cooperation orientations proposed by the participating leaders, the Prime Minister underscored the importance of core factors like working together to sustain peace, stability and development in a changing environment and forging closer cooperation to effectively cope with new global challenges for comprehensive and inclusive development, prosperity, safety and sustainability for both sides.

He called for enhanced dialogue, trust consolidation, observation of international law, and responsible behaviour of all countries for full implementation of the Declaration on the Conduct of Parties in the South China Sea (DOC) and early conclusion of a working, substantive, and effective Code of Conduct for the South China Sea that is in line with international law and the 1982 United Nations Convention on the Law of the Sea (UNCLOS 1982).

He expressed his hope that ASEAN and China would soon restore and beef up economic, trade and investment cooperation, suggesting China facilitate the import of ASEAN goods towards balanced trade ties.

PM Chính affirmed Việt Nam would continue efforts to contribute to the advancement of ASEAN-China relations for peace, security, stability, cooperation and development in the region and the world. Addressing the summit, Xi said: “China-ASEAN dialogue relations have gone through an extraordinary journey over the past three decades,” adding that the strategic partnership is a new milestone in the history of China-ASEAN relations and will inject new impetus into peace, stability, prosperity and development of the region and the world.

Regarding the future relations between China and ASEAN, Xi made several proposals.

First, pursuing dialogue instead of confrontation, building partnerships instead of alliances, and making concerted efforts to address the various negative factors that might threaten or undermine peace.

“China pursues long-term, friendly coexistence with neighbouring countries, and is part of the common efforts for durable peace in the region. China will never seek hegemony, still less bully smaller countries,” he said.

Second, he said China would be ready to work with ASEAN countries to jointly build a “health shield” for the region, including donating an additional 150 million doses of COVID vaccines to ASEAN countries and US$5 million to the COVID-19 ASEAN Response Fund. The Chinese leader also mentioned support for ASEAN in strengthening primary-level public health systems and tackling other traditional and non-traditional security challenges.

Other proposals include digital economy and green economy, green investment and finance.

“Harmony with nature is the basis for humanity’s sustained development,” Xi said, adding that China would be ready to open a dialogue with ASEAN on climate response.

He also highlighted the importance of building an amicable home together and urged the two sides to advocate common humanitarian values, promote people-to-people exchanges and deepen mutual learning between civilisations. —

Vietnam promotes its role as bridge connecting ASEAN with China HÀ NỘI — Việt Nam always stands side by side and stays ready to help Laos, within its ability, to push back the COVID-19 pandemic, Prime Minister Phạm Minh Chính told President of the Lao National Assembly Xaysomphone Phomvihane during their meeting in Hà Nội on Monday.

Both leaders said they were delighted to see that the great friendship, special solidarity and comprehensive cooperation between the two countries have been increasingly strengthened in all areas, from politics, diplomacy, national defence-security, to economy, trade, investment, socio-culture, and education-training.

Amid the COVID-19 pandemic, two-way trade still surpassed US$1 billion in the first ten months of 2021, up over 30.1 per cent from the same period last year. Việt Nam was the third biggest foreign investor in Laos, with 209 projects worth $5.18 billion.

Xaysomphone expressed his profound thanks to the Vietnamese Party, State and people for providing timely and invaluable support to Laos in the fight against the pandemic.

They pledged to continue effectively implementing signed education projects; jointly hold activities to celebrate the 60th founding anniversary of diplomatic ties and the 45th anniversary of the signing of the Việt Nam – Laos Treaty of Amity and Cooperation in 2022; support each other at multilateral forums, especially in issues regarding each country’s security and development, as well as peace, stability and cooperation in the region, including the sustainable use and management of water sources in Mekong River, and the East Sea issue. Informing his guests that he is to visit the Republic of Korea within the framework of the bilateral dialogue mechanism on economic cooperation at the deputy prime ministerial level, Khái said that during the visit, he and his RoK counterpart will evaluate the outcome of the economic partnership between the two countries since their previous dialogue in 2019.

Samsung is a big investor in Việt Nam and the Vietnamese Government wants to listen to its opinions in order to discuss with the RoK side how to create more favourable conditions for the firm to operate effectively, the Deputy PM said.

Choi Joo-ho told the host that currently, Samsung has six production factories, one research centre and one sales entity in Việt Nam.

Apart from mobile phone and household appliance products, Samsung also manufactures parts for televisions and telephones, he said. The firm currently employs 110,000 people in Việt Nam. According to Choi, so far, Samsung has disbursed 100 per cent of its registered capital of US$17.7 billion in Việt Nam.

He said that during the fourth wave of COVID-19 in Việt Nam, the firm received great support from Vietnamese localities, adding that its factories in the north resumed production in August and those in the south have operated stably since November.

Last year, Samsung’s revenue reached $56.7 billion. This figure is expected to rise 15 per cent this year, he said.

The executive thanked the Vietnamese Government for assisting the firm over the years, expressing hope that Việt Nam will continue to maintain safe and flexible adaptation to the pandemic to ensure that production is not interrupted.

Choi gave some proposals regarding the global minimum corporate tax in line with the regulations of the Organisation for Economic Cooperation and Development (OECD).

Deputy PM Khái pledged that Việt Nam will work to access more vaccine sources to enable businesses to operate safely in the new normal situation, while urging enterprises, including Samsung, to continue to coordinate with local government to effectively control the pandemic for long-term operations.

He lauded Samsung’s investment in a $220-million research and development centre in Việt Nam, which is scheduled for completion in 2022, affirming that the Vietnamese Government supports the firm’s long-term business strategy in Việt Nam. He asked Samsung to report its difficulties to the Vietnamese authorised agency for timely solutions.

Stressing Việt Nam’s determination to deliver on its commitments to businesses, Deputy PM Khái said that Việt Nam wants to listen to feedback from the business community in response to changes in policies. —

National Assembly Chair Vuong Dinh Hue has asked commercial banks to share difficulties with businesses, stressing that such support will also help themselves and that banks cannot have profits without businesses. The Vietnam Economic Forum, with nearly 200 delegates, including four Politburo members, the Secretary of the Central Party Committee, 20 members of the Party Central Committee, 25 ministries and heads of industries, and nine ambassadors and charge d’affaires closed on December 5.

Emphasizing that the Covid-19 pandemic was ‘unexpected, unprecedented and unpredictable’, Hue agreed with economists that in such a special context there should be special solutions. The bailout for economic recovery needs to support both aggregate supply and demand, with priority given to supply.

It’s necessary to implement both fiscal and monetary policies in a flexible and harmonious way, with a reasonable roadmap, wide coverage and a reasonable amount. The time for implementation is 2022-2023 and at most the first months of 2024.

The targets must be feasible and timely so as to satisfy businesses and people’s demands.

He agreed with economists that Vietnam could accept overexpenditures and public debt increases in the short term in exchange for economic recovery, but it must ensure national financial security in the long term, especially debt payment capability.

The management and allocation of resources needs to be transparent and public to prevent wrongdoings and conflicts related to interest groups. To do so, there must be a mechanism to supervise and inspect implementation in different ways.

Stressing that the socio-economic crisis is due to Covid-19, Hue pointed out that medical solutions will be the decisive and primary factors, while fiscal policy will play the leading role, implemented in harmonization with monetary policy.

He said that helping businesses and people overcome difficulties will help nurture sources of revenue for the state budget and the banking system.

“It’s not granting of favors here. By supporting businesses, commercial banks will support themselves. They cannot have profits without businesses,” he said.

Stand on your own feet

Replying to the warning that Vietnam may repeat the mistakes it made in 2008 when it launched an interest rate subsidy package, Hue said the package at that time did not have specific targets, which was a problem.

“We must not avoid the difficult and do the easy. There should be an interest rate subsidy package,” Hue said, adding that it would be better to focus on important fields, businesses, cooperatives and business households that can pay debts or recover.

It’s also necessary to give financial support to upgrading of old apartments. Hanoi, for example, has thousands of apartment buildings that need upgrading, HCMC has 600, and Hai Phong also has such buildings.

“We will obtain a high growth rate if these bottlenecks are removed,” he said.

The National Assembly Chair said that social housing projects are seriously needed, especially for low income workers, and the state should continue to divest from enterprises as parts of the economic recovery program.

Hue agreed with the opinion that businesses need reasonable regulation, not money, emphasizing that institutional improvement is the most important factor in the economic recovery program.

He said the important message of the forum is to have self-reliance, self-improvement, and ability to stand on one’s feet, as well as better national and corporate governance.

“The consistent message is that we need to go together. There’s a saying that if you want to go far, go together with your friends,” Hue said. More than 14,300 new COVID-19 infections confirmed in Vietnam on Sunday 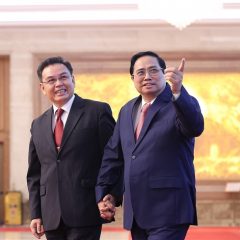