ĐÀ NẴNG — An art exhibition by Xuân Hạ depicts her life through personal experiences and external materials in her homeland in the central region.

Nắm Cát Tha Hương (The White Sand in Exile) is her work exploring the issues of sand exploitation in her hometown in Thăng Bình District in the south-central province of Quảng Nam.

She reflects the impact it has on the material and spiritual life of the local residents.

Hạ uses glass bottles she has collected that had washed up on shore to create her work.

“I was born in the central region and sand is something that is very familiar in my life.

“The exhibition brings emotions and memories of my childhood. I witnessed the river in my homeland drying up in summer because sand turned into cement. I visit my maternal grandparent’s graveyards with white sand and bushes.”

The exhibition originates from the culture of people that live in the central region, those that have attached their life to the sand.

A work entitled Trở Về (Back Home) is the glass bottles which include the date and the place they were found.

Mắc Cạn (Stranded) is broken glass bottles, monolithic glass and photos printed on paper and photos of bottle caps were printed on glass.

The series focuses on experimenting with materials, transforming both the forms and ideas of the glass bottles that Xuân Hạ collected.

By arranging and spreading the pieces, she recreates the scenes she has witnessed, including glass bottles lying across the wet shore and the graves on the dry white sand.

Xuân Hạ, born in Đà Nẵng City, is a visual and multimedia artist.

In her recent work, she looks at the impact of urbanisation and industrialisation on millennial behaviour, especially in Việt Nam.

Through various forms of experimenting with space, using fragments of daily materials and manipulating moving images, her work is documentation born out of opposition between herself and the changes of her environment.

She has been an active practitioner in the local art community since the end of 2015 when she co-founded the art collective Chaosdowntown Cháo in HCM City.

She currently lives and works in Đà Nẵng and co-founded A Sông Club in the hope of learning and understanding more about her homeland.

The exhibition is held under the Cultural and Creative Hub Việt Nam Project which is funded by the European Union and the British Council.

It is running until Sunday at 102 Lê Thanh Nghị Street, Đà Nẵng City. —

Young Vietnamese on the verge of becoming ‘lost generation’ amid pandemic

Buffalo tours in Hội An prove a hit

Several works of calligraphy by Vietnamese Zen master Thich Nhat Hanh are now on display at the Vietnam University of Fine Arts on Hanoi’s Yet Kieu Street.

The “Huong Thom Que Me” (The Fragrance of Motherland) exhibition, held April 14- 26, displays 100 works of calligraphy in various languages including Vietnamese, English, French and Chinese.

The works reflect the Zen master’s love for Mother Earth, who nurtures and protects all sentient beings.

The exhibition takes its name from the title of a new book that features Thich Nhat Hanh calligraphy.

According to Eve Yuen, a Hongkong-based art critic, Hanh’s works are choreographic calligraphy that exude exquisite qualities, incorporating straight and solid lines as well as flowing curves in a balanced composition.

The Zen master said he has done more than 10,000 calligraphic works since 1994. They have helped him demonstrate the art of mindful living to his students. They have become a source of donations supporting humanitarian projects in many developing countries.

“Writing calligraphy is a practice of meditation,” the Master has said.

“The way I do calligraphy, I do it in a certain way that can generate the energy of mindfulness, concentration, insight, and compassion during the time of practice.”

Thich Nhat Hanh, considered the second most influential Buddhist leader in the world after the Dalai Lama, studied and practiced Zen Buddhism from 1942.

Born in 1926, he became a monk at the age of 23 after studying Buddhism for seven years.

In the 1960s he spearheaded a movement by Buddhists in southern Vietnam that called for a negotiated end to the Vietnam War.

He left the country in 1966 and lived in Plum Village in southern France for decades, traveling regularly throughout North America and Europe to give lectures on mindfulness and peace.

Thich Nhat Hanh is also a celebrated poet and peace activist. He was nominated for the Nobel Prize by Martin Luther King, Jr. in 1967, and is the author of more than 100 books, including several bestsellers like the “The Miracle of Mindfulness.”

Thousands of mostly young people queued up for hours in Saigon to audition for Rap Viet, a reality show that seeks to unearth talented rappers.

A new tourism trend for the pandemic and beyond

After parking his car on the side of the road, 51-year-old Lưu Văn Thanh from Hà Nội, knows it’s time for a photoshoot.

His wife and friends are ready, posing on the mountain side with spectacular views of rice field terraces in the background.

Perfect pictures for their social media pages and to share with friends, capturing the breath-taking moments at the push of a button.

Thanh isn’t the only one who has had the same idea. Camera phones are clicking away all around but there isn’t a tour bus in sight.

He is among of group of 150 people taking part in the first ‘self-driving’ holiday hosted by Hà Nội Travel Agents’ Association and VGreen Sustainable Tourism Club along with the National Museum of Vietnamese History.

“I have been travelling a lot both inside and outside the country,” Thanh says. “But this is the first time I have experienced self-driving tourism.

The tour called “Northwestern Region – Season of Orchid Flowers” sees a convoy of cars leave the capital city before stopping at various locations in the northwest of Việt Nam.

The member cars, which all have logo of the club on the doors, follow one another on the route. They are all equipped with walkie-talkie radios and take rests, eat meals and spend the night at the same location.

“The tour followed the route that soldiers in Điện Biên Strategy marched to fight against the French in 1954, which moved me as it reminded me of my time training hard in the army,” Thanh says. Thanh says he will definitely join other self-driving tours in the future to broaden his travelling experiences.

He adds: “The trip is a little scary because many people are not used to driving on mountain roads but is worth it because of all the interesting things we see that you might not on normal tours.”

Phùng Quang Thắng, chairman of VGreen Sustainable Tourism Club says the highlight of the new tour product is experiencing culture on offer from the comfort of your own vehicles.

Tourists and cars meet at the museum in downtown Hà Nội – where information about the trip is explained including the landscapes of the roads, the historic Điện Biên Phủ Campaign and ethnic groups they will meet along the way.

“The self-driving tour was built on the foundation of cultural stories of more than 20 ethnic groups in the northwestern region,” Thắng says.

Vũ Thu Hường, who is on the trip with her husband, says: “We have lived with the ethnic minority people at their homes, we worked with them on the field, weaved cloth with them, enjoyed their traditional food and played their folk games.” Tourists can stop by various locations on the way.

“The trip is so relaxing, full of fun but there is also responsibility to respect local communities and protect the environment.”

Nguyễn Thiền Hậu, from the southern province of An Giang says he was also impressed with local customs and the landscape of the northwestern region.

“I will tell my friends at home to join such a tour,” he says.

After the success of the first self-driving tour, the next tour of its kind in mid-April, is already fully booked.

Vũ Giang Biên, deputy chairperson of VGreen Club says: “On the next self-driving tour, we will gather 10 to 15 cars to ensure the best conditions for tourists.”

She says nearly 100 tourists have signed up for the tour.

VGreen has prepared other trips for many smaller cars, connecting one another by walkie talkie. The club has also co-ordinated with localities to prepare health care support, first-aid services and rescue support when needed.

“All preparations for preventing the virus like health declarations, face masks and hand-washing gels have been prepared,” she says. “So whatever the circumstances, the tour can go ahead and ensure safety for tourists.”

Biên says Việt Nam has great potential to develop these types of holidays.

“From the north to the south, anywhere, interesting self-driving tours can be designed,” she says. 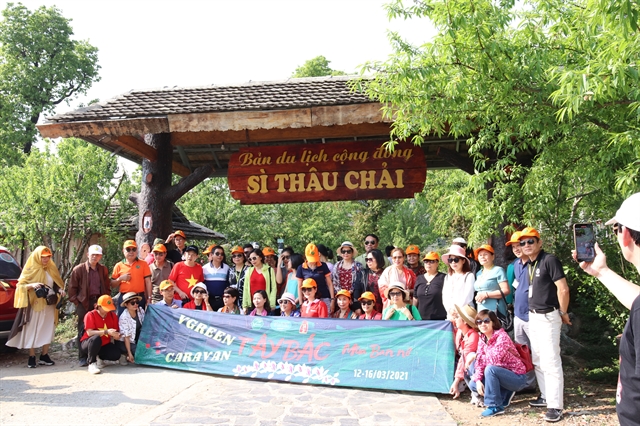 VGreen club has built up various tours for self-driving holidays that can take place over two, five and 10 days.

In the upcoming months, the club will consider routes along the central coastal areas and the south.

“We hope the self-driving tours will be not only a product in the pandemic but also a trend in the future with interesting experiences on routes with impressive landscapes and distinctive cultures,” Biên says.

“With such a good quality and sustainable product, VGreen Club is targeting not only domestic tourists but also foreign visitors,” she says.

Vũ Thế Bình, chairman of Việt Nam Tourism Association says: “In the past few years, the awareness of tourists has been enhanced.

“They travel, explore the foundations of culture, history, architecture and cuisine. So they need guidance and information.

When the pandemic is controlled tourists can join self-driving tours to neighbouring countries.

“What challenges this type of tourism is transportation of people and the driving experience of the tourists,” Thắng says.

“Travel agents should also let an experienced driver lead the group and also have drivers for tourists when they feel tired,” she says.

A recent survey by booking.com reflects new choices of Vietnamese people during the pandemic.

It found 75 per cent of tourists saying safety while travelling is their top priority while 42 per cent choosing less crowded destinations.

Half said they would not choose public means of transport and would prefer to drive by themselves.

Trương Đức Hải, Chairman of the Board of Hòn Ngọc Viễn Đông Company, which specialises in organising self-driving tours says the company sells more now than before the pandemic.

“Our customers tend to choose travelling with their family or friends to form small groups and travel by their own car with our guide or they may hire our small buses including guides,” he says. Discovering the culture of local ethnic groups is a highlight at the tour.

“This helps tourists access new places known by very few people, where they can support charity programme for locals,” he says.

Last year, self-driving tour Returning to Central Region brought hundreds of tourists to help in areas that had been seriously damaged by strong storms.

The tours often include professional photographers, who are ready to take photos for tourists during the trip.

And no matter what time of year, there is always a place worth visiting.

“Each season has its own attraction for people to travel and explore,” says Hải.

“The departing and returning routes are designed differently so that tourists can experience different destinations and resting places, which make self-driving tours more interesting than normal tours.”